For the entire month of July and the first half of August, eastern China has been baking in a record-breaking heat wave. Nineteen provinces endured above-normal temperatures. Shanghai broke its all-time record high three times in as many weeks. The current record—40.8 degrees Celsius (105.4°F)—was set on August 7, 2013. At least 40 people have died during the heat wave, including ten in Shanghai, according to the Xinhua news service.

Here’s a NASA satellite image that shows temperature anomalies across China between August 5 and August 12, 2013. Red areas are warmer than the long-term average for the week, while cooler-than-average temperatures are blue. 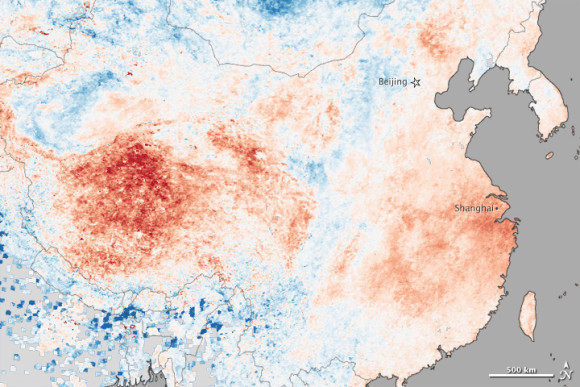 While much of China was warm during this period, the worst of the heat wave was concentrated near the coast and in Tibet. This weather pattern is tied to a subtropical high-pressure system parked over southern China, according to the China Meteorological Administration.

Though miserable everywhere, the heat wave was likely worst in China’s cities, where manmade surfaces absorb heat during the day and cool slowly at night. As a result, cities are warmer during the day and slower to cool at night, making an extended heat wave more uncomfortable, and more deadly, in a city. The image below shows this “urban heat island” effect in Shanghai. 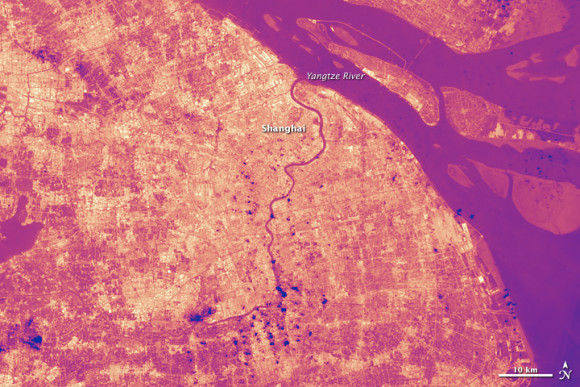 The image was made with measurements taken on August 13, 2013 by the Thermal Infrared Sensor on the Landsat 8 satellite. The warmest surfaces are yellow, while cooler surfaces are pink. The image shows pockets of very warm areas, particularly downtown, surrounded by cooler suburban areas. The dark purple dots are cold clouds.

Chinese officials have declared a weather emergency, warning residents to limit time outdoors. It is the first time the country has issued a weather warning for heat. China’s National Meteorological Center expected the heat to break sometime after August 15.