NASA scientists don’t often learn that their spacecraft is at risk of crashing into another satellite. However, Fermi was just one week away from an unusually close encounter with Cosmos 1805, a defunct spy satellite dating back to the Cold War.

NASA scientists don’t often learn that their spacecraft is at risk of crashing into another satellite. But when Julie McEnery, the project scientist for NASA’s Fermi Gamma-ray Space Telescope, checked her email on March 29, 2012, she found herself facing this precise situation.

While Fermi is in fine shape today, continuing its mission to map the highest-energy light in the universe, the story of how it sidestepped a potential disaster offers a glimpse at an underappreciated aspect of managing a space mission: orbital traffic control.

As McEnery worked through her inbox, an automatically generated report arrived from NASA’s Robotic Conjunction Assessment Risk Analysis (CARA) team based at NASA’s Goddard Space Flight Center in Greenbelt, Md. On scanning the document, she discovered that Fermi was just one week away from an unusually close encounter with Cosmos 1805, a defunct spy satellite dating back to the Cold War.

Get the big picture: Space junk headed for a cascade of collisions 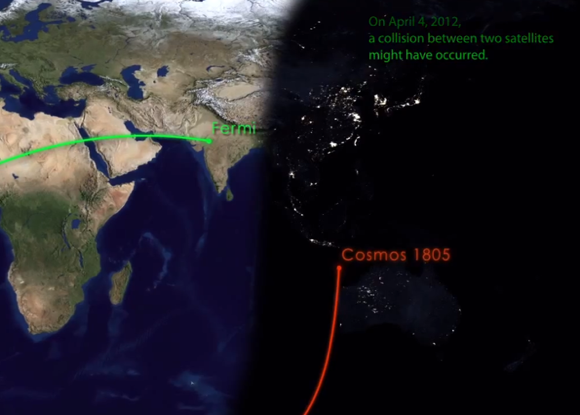 The two objects, speeding around Earth at thousands of miles an hour in nearly perpendicular orbits, were expected to miss each other by a mere 700 feet.

“My immediate reaction was, ‘Whoa, this is different from anything we’ve seen before!'” McEnery recalled.

Although the forecast indicated a close call, satellite operators have learned the hard way that they can’t be too careful. The uncertainties in predicting spacecraft positions a week into the future can be much larger than the distances forecast for their closest approach.

This was most dramatically demonstrated on Feb. 10, 2009, when a study revealed that Cosmos 2251, a dead Russian communications satellite, would pass about 1,900 feet from the functioning Iridium 33 communications satellite later in the day. At the predicted time of closest approach, all contact with Iridium 33 was lost. Radar revealed clouds of debris traveling along the orbits of both spacecraft, confirming the first known satellite-to-satellite collision.

That crash generated thousands of fragments large enough to be tracked and many smaller pieces that evade detection. Much of the wreckage remains a hazard to operating spacecraft because only about 20 percent of the trackable pieces have reentered the atmosphere.

With a speed relative to Fermi of 27,000 mph, a direct hit by the 3,100-pound Cosmos 1805 would release as much energy as two and a half tons of high explosives, destroying both spacecraft.

Despite the apparent crowding in Earth orbit, there’s usually a vast amount of space between individual objects. Close approaches — also known as conjunctions — with fragments, rocket bodies and active payloads remain infrequent events. Moreover, few of the potential conjunctions identified a week into the future will actually materialize.

“It’s similar to forecasting rain at a specific time and place a week in advance,” said Goddard’s Eric Stoneking, the attitude control lead engineer for Fermi. “As the date approaches, uncertainties in the prediction decrease and the initial picture may change dramatically.”

Twice before, the Fermi team had been alerted to potential conjunctions, and on both occasions the threats evaporated. It was possible the Cosmos 1805 encounter would vanish as well, and the spacecraft’s observations could continue without interruption.

But the update on Friday, March 30, indicated otherwise. The satellites would occupy the same point in space within 30 milliseconds of each other.

“It was clear we had to be ready to move Fermi out of the way, and that’s when I alerted our Flight Dynamics Team that we were planning a maneuver,” McEnery said.

The only way to accomplish this was by firing thrusters designed to ensure that Fermi would never pose a threat to another satellite. Intended for use at the end of Fermi’s operating life, the thrusters were designed to take it out of orbit and allow it burn up in the atmosphere.

Because a failure of this system, such as a propellant leak or an explosion, could have ended Fermi’s mission prematurely, the thrusters had never been tested, adding a new source of anxiety for McEnery.

“You can’t help but be nervous thinking about highly flammable fluids heading down pipes they’d never flowed down before,” she said. “But having done this, we now know the system works as designed, and it gives us confidence should we need to maneuver again in the future.”

The Goddard CARA team determined how big a push Fermi would need to mitigate the threat. Working with the Joint Space Operations Center (JSpOC) at Vandenberg Air Force Base in California, CARA scientists also checked that the projected new orbit wouldn’t put Fermi on course for a conjunction with another object. The Flight Operations Team selected possible times for the primary maneuver and, just in case, up to three additional ones.

Over the weekend, the radar and optical sensors of the U.S. Space Surveillance Network continued keeping tabs on Cosmos 1805 and every other artificial object larger than 4 inches across in Earth orbit. Of the 17,000 objects currently tracked, only about 7 percent are active satellites.

Once each day, JSpOC analyzes the updated orbits, looks for possible conjunctions a week or more into the future, and notifies the Goddard CARA team of any events involving NASA’s robotic missions. Another group at NASA’s Johnson Space Flight Center in Houston performs the same function for all spacecraft carrying astronauts, including the International Space Station.

By Tuesday, April 3, the threat still had not receded and all plans were in place for firing Fermi’s thrusters.

Shortly after noon EDT, the spacecraft stopped scanning the sky and oriented itself along its direction of travel. It then parked its solar panels and tucked away its high-gain antenna to protect them from the thruster exhaust.

“The maneuver, which was performed by the spacecraft itself based on procedures we developed a long time ago, was very simple, just firing all thrusters for one second,” Stoneking explained. “There was a lot of suspense and tension leading up to it, but once it was over, we just sighed with relief that it all went well.”

By 1 p.m., Fermi was back to doing science. A few hours later, the various teams met to evaluate the results of the maneuver and determine if another would be required. When the two spacecraft reached their long-awaited conjunction the following day, they would miss by a comfortable margin of 6 miles, with no further actions needed.

Last year, the Goddard CARA team participated in collision-avoidance maneuvers for seven other missions. A month before the Fermi conjunction came to light, Landsat 7 dodged pieces of Fengyun-1C, a Chinese weather satellite deliberately destroyed in 2007 as part of a military test. And in May and October, respectively, NASA’s Aura and CALIPSO Earth-observing satellites took steps to avoid fragments from Cosmos 2251.