Video: Flying over an extraterrestrial land of lakes

Saturn’s moon Titan is one of the most Earth-like places in the solar system, and it’s the only known place other than our planet that has stable liquid on its surface. This liquid isn’t water. It’s far too cold on Titan for liquid water to exist. Instead, the lakes and seas on Titan’s surface are liquid hydrocarbons, mostly methane and ethane. The movie above is a colorized flyover made from images of NASA’s Cassini spacecraft, which has been orbiting Saturn and weaving among its moons since 2004. This video takes viewers over the two largest seas on Saturn’s moon Titan and nearby lakes. Enjoy your trip!

By the way, NASA has lots more to say about Titan and its lakes. Click here to learn more about Titan lakes from NASA JPL

Bottom line: Video flyover – made from Cassini images – of Titan’s lakes and seas. 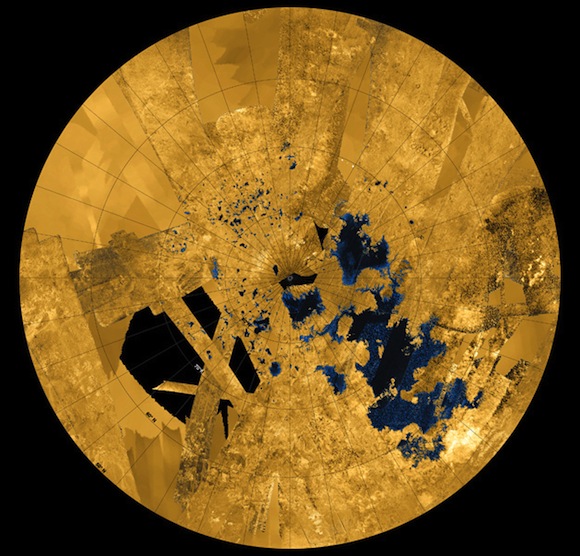 This colorized mosaic from NASA’s Cassini mission shows the most complete view yet of Titan’s northern land of lakes and seas. Saturn’s moon Titan is the only world in our solar system other than Earth that has stable liquid on its surface. The liquid in Titan’s lakes and seas is mostly methane and ethane. Image credit: NASA/JPL-Caltech/ASI/USGS