View from space: The sun flares up 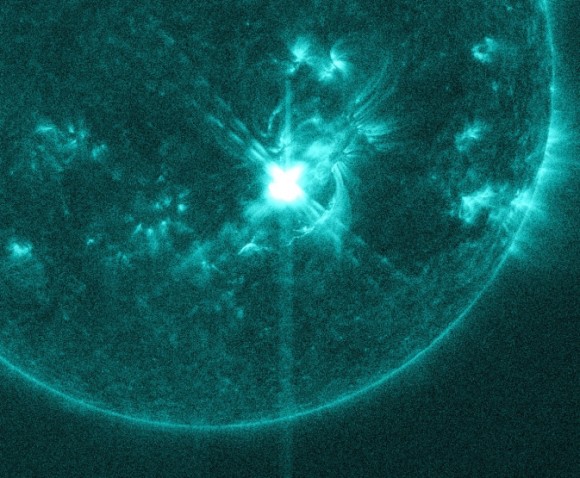 NASA’s Solar Dynamics Observatory captured this image of an X1.1 class flare in the early hours of Nov. 10, 2013. The image represents light with a wavelength of 131 Angstroms, which is typically colorized in teal. Image credit: NASA/SDO

Solar flares are powerful bursts of radiation. Harmful radiation from a flare cannot pass through Earth’s atmosphere to physically affect humans on the ground, however — when intense enough — they can disturb the atmosphere in the layer where GPS and communications signals travel. 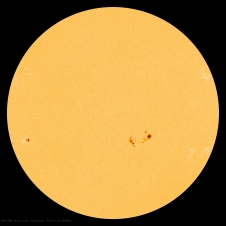 This flare is classified as an X1.1 class flare. “X-class” denotes the most intense flares, while the number provides more information about its strength. An X2 is twice as intense as an X1, an X3 is three times as intense, etc.

Increased numbers of flares are quite common at the moment, since the sun’s normal 11-year activity cycle is ramping up toward solar maximum conditions. Humans have tracked this solar cycle continuously since it was discovered in 1843, and it is normal for there to be many flares a day during the sun’s peak activity. The first X-class flare of the current solar cycle occurred on February 15, 2011, and the largest X-class flare in this cycle was an X6.9 on August 9, 2011. This is the seventh significant flare since Oct. 23, 2013, with the largest being an X3.3 on Nov. 5, 2013.

The Solar Dynamics Observatory (SDO), launched on February 11, 2010, is a NASA mission which will observe the sun for over five years.