COLLEGE STATION, April 16, 2012 – Coming to an area near you: snakes, and plenty of them. With unusually warm temperatures and plenty of rainfall this spring, experts say this could be a bumper crop year for snakes. While Texas has never been short on the snake commodities list, people and pets should be aware that they are out and about, says a Texas A&M University expert.

She says a snakebite on a human can be painful – and very expensive.

It is not uncommon for a person bitten by a venomous snake to have medical bills of $50,000 or more because of hospitalization, which can run from one day to several weeks, treatments on damaged tissues, plus antivenin treatments that can run into the thousands of dollars, she adds. 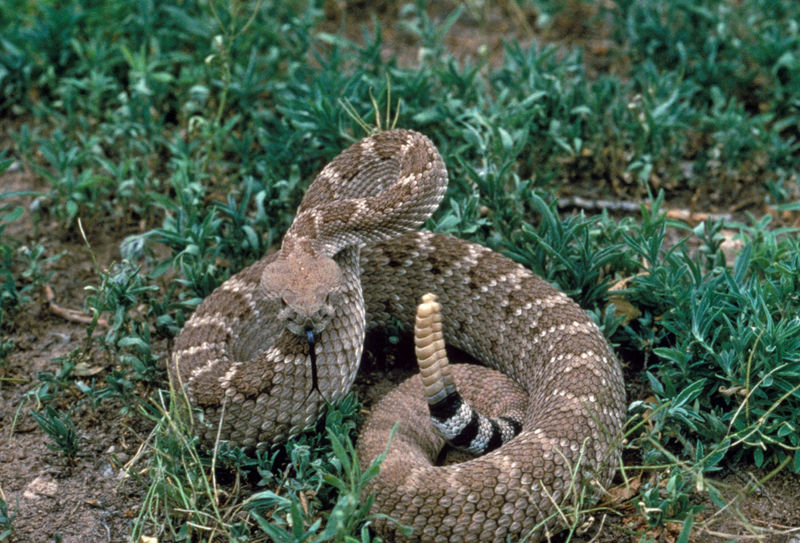 Although snakes are found in most of the world – Ireland, Iceland and New Zealand are some of the few snake-free countries – only four types found in Texas are venomous: the coral snake, copperhead, rattlesnake and cottonmouth (also called water moccasin), and the state is a ground zero, slithering paradise for all of them.

“The thing to remember about snakes is that generally, they want to be left alone. They are probably more afraid of you,” Heatley explains.

“Of the four types of venomous snakes in Texas, the coral, copperhead and rattlesnake are almost never aggressive unless they are provoked. The cottonmouth has been known to be a little on the aggressive side, so you should be a little more wary of it, especially if you are near a creek or lake where they have been frequently seen.”

Heatley says an inquisitive pet can be a snakebite victim.

If bitten, a dog usually suffers the bite on its face or nose, while cats tend to be nicked on their paws, she explains.

“The area that has been bitten will usually begin to swell almost immediately, and that’s a tell-tale sign to look for,” she notes. Venom can spread quickly inside the animal, and kidney failure can result within 12 to 24 hours, which is why a bitten animal needs immediate treatment.

She says it’s important to know that all snakebites are not the same.

“Sometimes an animal or person will get just a small amount of venom from a bite, and sometimes it’s much more,” she adds.

“There is also such a thing as a ‘dry bite’ in which no venom is injected at all. And also, larger snakes tend to have lesser amounts of venom than smaller ones.

“One of the questions we often get is, how can you tell a venomous snake from a harmless one? The answer is that’s difficult because there are numerous types of snakes that are not venomous that look very similar to a venomous one. Look for the triangular- shaped head,” Heatley notes, while adding that coral snakes are brightly colored with rows of yellow, red and black markings. But a coral snake is part of the cobra family, so its venom can be very potent.

For more information about snakes, she recommends such websites as Herps of Texas, Austin Herpetological Society and Texas Parks and Wildlife.