New study supports theory that Earth’s earliest crust was folded back into its mantle and returned to the surface in volcanoes.

An international team of researchers, including Scripps Institution of Oceanography, UC San Diego, geochemist James Day, has found new evidence that material contained in oceanic lava flows originated in Earth’s ancient Archean crust. These findings support the theory that much of the Earth’s original crust has been recycled by the process of subduction, helping to explain how the Earth has formed and changed over time. 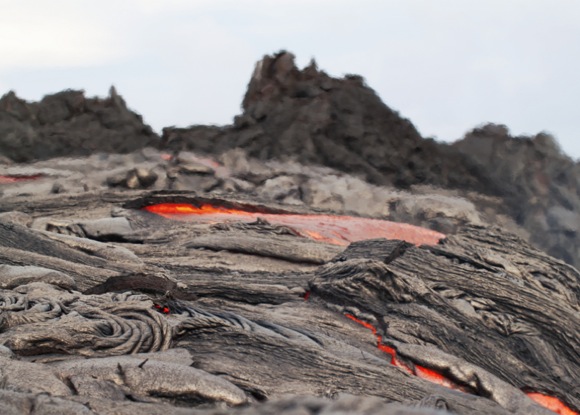 The Archean geologic eon, Earth’s second oldest, dating from 3.8 to 2.5 billion years ago, is the source of the oldest exposed rock formations on the planet’s surface. (Archean rocks are known from Greenland, the Canadian Shield, the Baltic Shield, Scotland, India, Brazil, western Australia, and southern Africa.) Although the first continents were formed during the Archean eon, rock of this age makes up only around seven percent of the world’s current crust.

“Our new results are important because they provide strong evidence not only to tie materials that were once on Earth’s surface to an entire cycle of subduction, storage in the mantle, and return to the surface as lavas, but they also place a firm time constraint on when plate tectonics began; no later than 2.5 billion years ago,” said Day. “This is because mass independent sulfur signatures have only been shown to occur in the atmosphere during periods of low oxygenation prior to the rise of oxygen-exhaling organisms.”

The new study, which will be published in the April 24 issue of the journal Nature, adds further support to the theory that most of the Archean crust was subducted or folded back into the Earth’s mantle, evidence of which is seen in the presence of specific sulfur isotopes found in some oceanic lava flows.

According to the researchers, because terrestrial independently fractionated (MIF) sulfur-isotope isotope signatures were generated exclusively through atmospheric photochemical reactions until about 2.5 billion years ago, material containing such isotopes must have originated in the Archean crust. In the new study, the researchers found MIF sulfur-isotope signatures in olivine-hosted sulfides from relatively young (20-million-year-old) ocean island basalts (OIB) from Mangaia, Cook Islands (Polynesia), providing evidence that the mantle is the only possible source of the ancient Archean materials found in the Mangaia lavas.

“The discovery of MIF-S isotope in these young oceanic lavas suggests that sulfur—likely derived from the hydrothermally-altered oceanic crust—was subducted into the mantle more than 2.5 billion years ago and recycled into the mantle source of the Mangaia lavas,” said Rita Cabral, the study’s primary author and a graduate student in Boston University’s Department of Earth and Environment.