Ultrasonic sounds of the rainforest

New research aimed at developing ultrasonic microphones with insect-like sensitivity will continue in the rainforests of Colombia and Ecuador.

Following the discovery of a previously unidentified hearing organ in the South American bushcrickets’ ear, a scientist from the University of Lincoln (UK) will now study the role of this Auditory Vesicle in hearing sensitivity.

Dr Fernando Montealegre-Zapata, from the University’s School of Life Sciences, aims to understand how bushcrickets or katydids pick up on ultrasonic frequencies in their natural environment. The insects communicate using the highest-pitched calls in nature (130-150 kHz), which are not detected by humans. The male produces sound by rubbing its wings to attract distant females.

He said: “This animal can detect ultrasonic signals even at long distances. The problem is that at such high frequencies the sound travels in very short wavelengths which get diffracted, meaning the sound gets weaker as more obstacles are in the dispersive path. However, the bushcricket’s small ear is still able to detect this fading ultrasonic energy at long distances. I want to test how the bushcrickets manage to do that in a field environment. The fluid in the katydid ‘cochlea’, which I named the Auditory Vesicle, is the key element in the hearing process. We want to investigate why this is the case and the first step is testing its sensitivity in their natural environment and revealing the chemical composition.”

In mammals, hearing relies on three stages: an eardrum collecting sound, a middle ear impedance converter and a cochlear frequency analyser. Dr Montealegre-Zapata recently demonstrated that the bushcricket’s ear performs these steps in the hearing process, something previously unknown in insects. 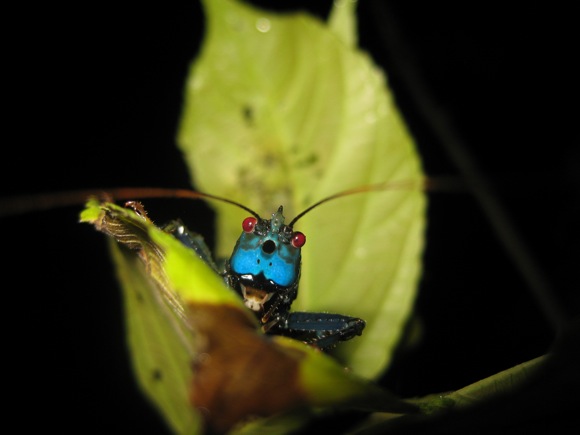 Following the discovery of a previously unidentified hearing organ in the South American bushcrickets’ ear, a scientist from the University of Lincoln (UK) will now study the role of this Auditory Vesicle in hearing sensitivity.

The calls of the bushcricket are theoretically not suited for long-range attraction, as ultrasound suffers excess attenuation in rainforest environments. Therefore, the insect’s ears must have evolved to achieve sufficient sensitivity at such frequencies.

Dr Montealegre-Zapata said: “I want to find out how these insects mitigate the effects of sound degradation and how the female ear is structurally and functionally organised to detect distant calling males. The small ear will be used as a biological microphone to detect the sensitivity and hearing range of the female. In the future we want to produce microphones that work like this.”

The ears of these ultrasonic insects are extremely sensitive and have a clear size and sensitivity ratio advantage over equally responsive microphones.

In particular, condenser microphones (used in hearing research, plus the automotive and music industries) are expensive, mechanically fragile, susceptible to humidity and not very sensitive.

By constructing network analogues between mechanical (insect) and electrical (microphone) systems, this project can advance research into the design and construction of ultrasensitive microphones with unusual broad frequency responses.

Dr Montealegre-Zapata has received a grant from National Geographic for the field work, which will be carried out in collaboration with Dr Heiner Römer from the University of Graz, Austria.

A further grant from The Royal Society is being used to buy ultrasonic sensitive testing equipment for use in the research, which will be carried out at the Natural National Park Gorgona, Colombia.

Another aspect of the project to identify the auditory vesicle’s fluid composition is being undertaken by the University of Lincoln’s Dr.Jose Gonzalez-Rodriguez.

Via University of Lincoln