Researchers are able to make particles, liquid droplets, and even toothpicks fly in mid-air by letting them ride on acoustic waves. For the first time, they can also control their movement. 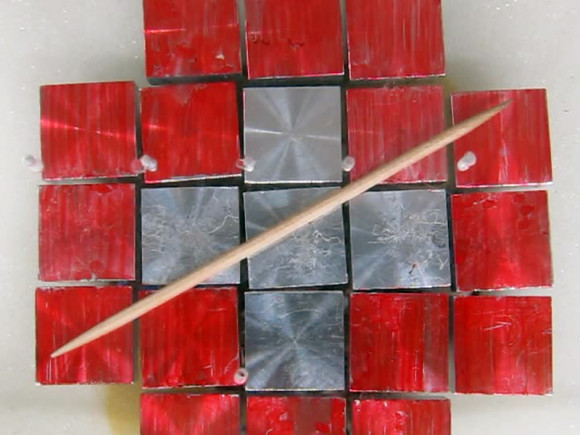 A toothpick floating in mid-air without any support – this may sound like it involves hidden threads, magnets or other sleight-of-hand tricks from magicians. But the actual trick used by Daniele Foresti, former doctoral student now a postdoctoral researcher at the Laboratory of Thermodynamics in Emerging Technologies, is based on acoustic waves.

Despite the appearance of “magic”, he and his colleagues realized and controlled the planar movement of floating objects in air, regardless of their properties, involving no sorcery but science. This is not simply an amusing trick: moving objects such as particles or droplets of a liquid freely in mid-air makes it possible to investigate processes while avoiding any disruptive contact with a surface. For instance, some chemical reactions and biological processes are compromised by surfaces, and certain substances disintegrate on contact with a surface.

Until now, scientists have been able to generate such a “contact-free” levitational state only with the help of magnets, electrical fields or in liquids with the help of buoyancy. These methods, however, limit the selection of materials that can be handled. “It is extremely difficult to levitate and precisely move a drop of liquid with a magnet. The fluid has to possess magnetic properties. In liquids, where buoyancy force supports levitation, you can only use immiscible liquids such as a drop of oil in water,” explains Dimos Poulikakos, Professor of Thermodynamics and head of the research project.

With acoustic waves, in contrast, it is possible to levitate various objects regardless of their properties. The limiting factor is the maximum diameter of the object, which must correspond to half the wavelength of the acoustic wave being used. An object reaches the stationary levitated state when all the forces acting on it are in equilibrium. In other words, the force of gravity that pulls the object in one direction is counteracted by an equally large force in the opposite direction. This force comes from the acoustic wave, which the researchers generate as a standing wave between an emitter and a reflector that reverberates the acoustic waves. The force of the acoustic wave pushes against the object and thus prevents it from falling due to gravity. It is conceptually similar to the air jet from a fan that keeps a ping-pong ball in the air. 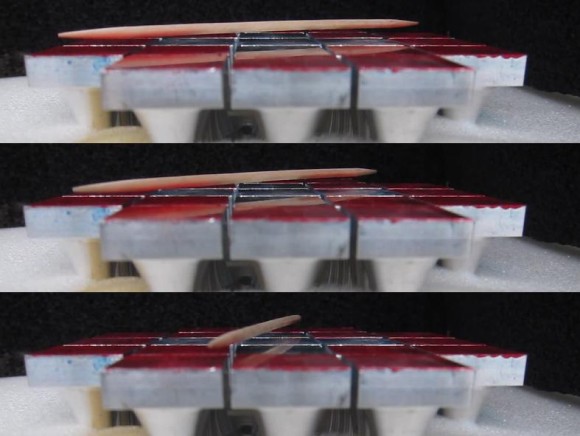 Making a flying droplet of coffee

The knowledge that acoustic waves can exert a force – the acoustic radiation pressure effect – on an object to keep it in suspension was discovered more than 100 years ago. Until now, however, no one had been successful in controlling the motion of objects riding on acoustic waves in mid-air. Foresti achieved this goal by switching on multiple emitter-reflector modules in parallel next to each other. He varied the acoustic waves from module to module in order to transfer particles or droplets of liquid from one module to the next.

In a test run, Foresti used this method to move a granule of instant coffee on to a droplet of water and merge the two. In a further experiment, he mixed two droplets of liquid with different pH values, one alkaline and the other acidic; the resulting droplet contained a fluorescent pigment that glows only at a neutral pH value. In a video, he captured how the two droplets mix and the pigment begins to glow.

Study of processes in a levitated state

“This method of moving levitated objects could have a wide range of possible applications,” says Foresti. The process of controlled movement can run in parallel with several objects, making it interesting for industrial applications. For example, some biological and chemical experiments require particles or droplets of source material to be initially processed and then analysed. With this technique, researchers can mix tiny amounts of substances and liquids in a step by step manner without any chemical changes arising due to contact with a surface.

The researchers already tested the method with droplets and particles of several millimetres in diameter. The excitation of the acoustic waves has to be chosen after careful theoretical analysis: If the acoustic force exceeds the surface force of a certain liquid, the droplet is atomised explosively. The researchers successfully levitated drops of water, hydrocarbons and various solvents.