Nearly one in 10 U.S. watersheds is “stressed,” with demand for water exceeding natural supply, according to a new analysis of surface water in the United States. What’s more, the lowest water flow seasons of recent years—times of great stress on rivers, streams, and sectors that use their waters—are likely to become typical as climates continue to warm. 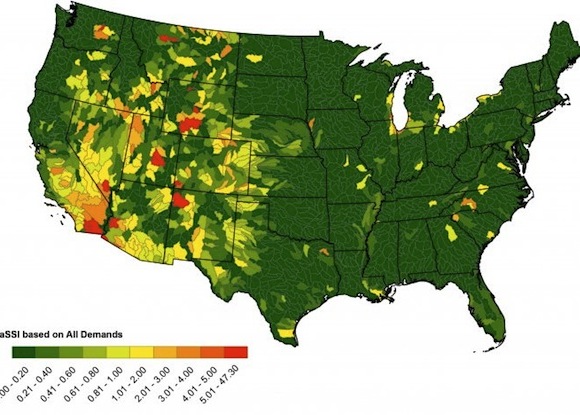 Nearly one in 10 U.S. watersheds is “stressed,” with demand for water exceeding natural supply, according to a new, CIRES-led analysis of surface water in the United States. This map shows all stressed watersheds in the continental United States (1999-2007), with color indicating increasing levels of stress, from light green to red. Map courtesy CIRES

“By midcentury, we expect to see less reliable surface water supplies in several regions of the United States,” said the study’s lead author, Kristen Averyt, associate director for science at the Cooperative Institute for Research in Environmental Sciences (CIRES) at the University of Colorado Boulder. “This is likely to create growing challenges for agriculture, electrical suppliers and municipalities, as there may be more demand for water and less to go around.”

Averyt and her colleagues evaluated supplies and demands on freshwater resources for each of the 2,103 watersheds in the continental United States, using a large suite of existing data sets.

They identified times of extreme water stress between 1999 and 2007, and they estimated future surface water stress—using existing climate projections—for every watershed. In the paper, published online in Environmental Research Letters on Sept. 17, the authors also diagnosed the reasons contributing to stress.

Across the United States, the team found that water supplies are already stressed (i.e., demands for water outstrip natural supplies) in 193 of the 2,103 watersheds examined. In addition, the researchers reported:

The U.S. West is particularly vulnerable to water stress, for two reasons: 1) the differences between average demand and average supply are relatively small, so slight shifts in either supplies or demands can trigger stress, and 2) Western water users have long relied on imported and stored water to supplement natural supplies, in order to meet demands.
In most parts of the country, agriculture requires the most water, and contributes most to water stress.
In Southern California, thirsty cities are the greatest stress on the surface water system.
In scattered locations, the cooling water needs of electric power plants represent the biggest demand on water.
“A single power plant has the potential to stress surface supplies in a local area,” said co-author James Meldrum, a researcher in the Western Water Assessment, a program of the National Oceanic and Atmospheric Administration (NOAA) and CIRES. It’s critical to understand how various sectors contribute to the stress on a water system, Meldrum said, because effective remedies depend on accurate diagnosis.

Agricultural and municipal demands are spread among many users, for example, allowing flexible changes in water use and efficiency of use. “But because power plant decisions are so capital intensive, they tend to be locked in for a long time,” Meldrum said. “With the potential for increasing water stress in the next few decades across parts of the United States, power plants—and our access to electricity —may be put at risk when water is not adequately considered in planning.”

The authors deliberately didn’t account for future changes in demand for freshwater. Rather, this analysis was designed to identify the sensitivity of U.S. watersheds to changes in surface water availability.

The researchers hope that the analysis will provide useful information for people reliant on surface waters. “We hope research like this helps us understand challenges we might face in building a more resilient future,” Meldrum said.

Via University of Colorado