Astronomers have used a new method to determine the mass of the planetary nursery around the star TW Hydrae.At a distance of merely 176 light-years from Earth, this is the closest star that is currently forming new planets.

Where Egyptologists have their Rosetta Stone and geneticists their Drosophila fruit flies, astronomers studying planet formation have TW Hydrae: A readily accessible sample object with the potential to provide foundations for an entire area of study. TW Hydrae is a young star with about the same mass as the Sun. It is surrounded by a protoplanetary disk: a disk of dense gas and dust in which small grains of ice and dust clump to form larger objects and, eventually, into planets. This is how our Solar System came into being more than 4 billion years ago.

What is special about the TW Hydrae disk is its proximity to Earth: at a distance of 176 light-years from Earth, this disk is two-and-a-half times closer to us than the next nearest specimens, giving astronomers an unparalleled view of this highly interesting specimen – if only figuratively, because the disk is to small to show up on an image; its presence and properties can only be deduced by comparing light received from the system at different wavelengths (that is, the object’s spectrum) with the prediction of models. 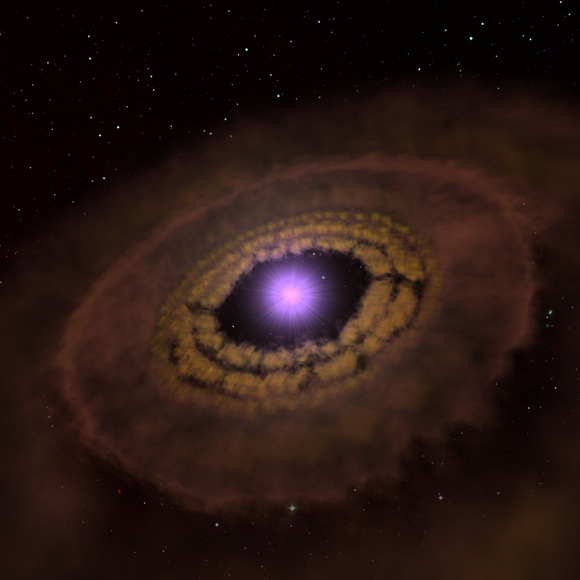 Artist’s impression of the gas and dust disk around the young star TW Hydrae. New measurements using the Herschel space telescope have shown that the mass of the disk is greater than previously thought. Image credit: Axel M. Quetz (MPIA)

In consequence, TW Hydrae has one of the most frequently observed protoplanetary disks of all, and its observations are a key to testing current models of planet formation. That’s why it was especially vexing that one of the fundamental parameters of the disk remained fairly uncertain: The total mass of the molecular hydrogen gas contained within the disk. This mass value is crucial in determining how many and what kinds of planets can be expected to form.

Previous mass determinations were heavily dependent on model assumptions; the results had significant error bars, spanning a mass range between 0.5 and 63 Jupiter masses. The new measurements exploit the fact that not all hydrogen molecules are created equal: Some very few of them contain a deuterium atom – where the atomic nucleus of hydrogen consists of a single proton, deuterium has an additional neutron. This slight change means that these “hydrogen deuteride” molecules consisting of one deuterium and one ordinary hydrogen atom emit significant infrared radiation related to the molecule’s rotation.

The Herschel Space Telescope provides the unique combination of sensitivity at the required wavelengths and spectrum-taking ability (“spectral resolution”) required for detecting the unusual molecules. The observation sets a lower limit for the disk mass at 52 Jupiter masses, with an uncertainty ten times smaller than previous result. While TW Hydrae is estimated to be relatively old for a stellar system with disk (between 3 and 10 million years), this shows that there is still ample of matter in the disk to form a planetary system larger than our own (which arose from a much lighter disk).

On this basis, additional observations, notably with the millimeter/submillimeter array ALMA in Chile, promise much more detailed future disk models for TW Hydrae – and, consequently, much more rigorous tests of theories of planet formation.

The observations also throw an interesting light on how science is done – and how it shouldn’t be done. Thomas Henning explains: “This project started in casual conversation between Ted Bergin, Ewine van Dishoek and me. We realized that Herschel was our only chance to observe hydrogen deuteride in this disk – way too good an opportunity to pass up. But we also realized we would be taking a risk. At least one model predicted that we shouldn’t have seen anything! Instead, the results were much better than we had dared to hope.”

TW Hydrae holds a clear lesson for the committees that allocate funding for scientific projects or, in the case of astronomy, observing time on major telescopes – and which sometimes take a rather conservative stance, practically requiring the applicant to guarantee their project will work. In Henning’s words: “If there’s no chance your project can fail, you’re probably not doing very interesting science. TW Hydrae is a good example of how a calculated scientific gamble can pay off.”

Via Max-Planck Institute for Astronomy