The wings of the Seagull Nebula

This new image from ESO shows a section of a cloud of dust and glowing gas called the Seagull Nebula. These wispy red clouds form part of the “wings” of the celestial bird.

Running along the border between the constellations of Canis Major (The Great Dog) and Monoceros (The Unicorn) in the southern sky, the Seagull Nebula is a huge cloud mostly made of hydrogen gas. It’s an example of what astronomers refer to as an HII region. Hot new stars form within these clouds and their intense ultraviolet radiation causes the surrounding gas to glow brightly.

The reddish hue in this image is a telltale sign of the presence of ionised hydrogen. The Seagull Nebula, known more formally as IC 2177, is a complex object with a bird-like shape that is made up of three large clouds of gas — Sharpless 2-292 (eso1237) forms the “head”, this new image shows part of Sharpless 2-296, which comprises the large “wings”, and Sharpless 2-297 is a small, knotty addition to the tip of the gull’s right “wing”. 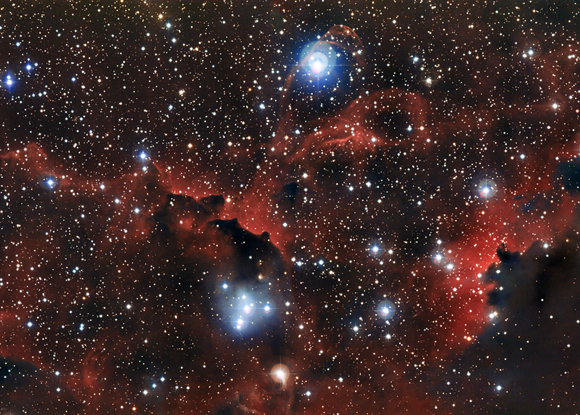 This image shows the intricate structure of part of the Seagull Nebula, known more formally as IC 2177. These wisps of gas and dust are known as Sharpless 2-296 (officially Sh 2-296) and form part of the “wings” of the celestial bird. This region of the sky is a fascinating muddle of intriguing astronomical objects — a mix of dark and glowing red clouds, weaving amongst bright stars. This new view was captured by the Wide Field Imager on the MPG/ESO 2.2-metre telescope at ESO’s La Silla Observatory in Chile. Credit: ESO

These objects are all entries in the Sharpless nebula catalogue, a list of over 300 glowing clouds of gas compiled by American astronomer Stewart Sharpless in the 1950s. Before he published this catalogue Sharpless was a graduate student at the Yerkes Observatory near Chicago, USA, where he and his colleagues published observational work that helped to show that the Milky Way is a spiral galaxy with vast, curved arms.

Spiral galaxies can contain thousands of HII regions, almost all of which are concentrated along their spiral arms. The Seagull Nebula lies in one of the spiral arms of the Milky Way. But this is not the case for all galaxies; while irregular galaxies do contain HII regions, these are jumbled up throughout the galaxy, and elliptical galaxies are different yet again — appearing to lack these regions altogether. The presence of HII regions indicates that active star formation is still in progress in a galaxy.

This image of Sharpless 2-296 was captured by the Wide Field Imager (WFI), a large camera mounted on the MPG/ESO 2.2-metre telescope at ESO’s La Silla Observatory in Chile. It shows only a small section of the nebula, a large cloud that is furiously forming hot stars in its interior. The frame shows Sharpless 2-296 lit up by several particularly bright young stars — there are many other stars scattered across the region, including one so bright that stands out as the gull’s “eye” in pictures of the entire complex. 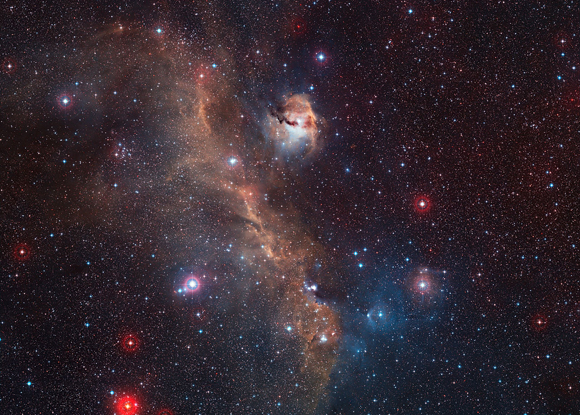 This wide-field view captures the evocative and colourful star formation region of the Seagull Nebula, IC 2177, on the borders of the constellations of Monoceros (The Unicorn) and Canis Major (The Great Dog). This view was created from images forming part of the Digitized Sky Survey 2. Credit: ESO/Digitized Sky Survey 2. Acknowledgement: Davide De Martin

Wide-field images of this region of the sky show a multitude of interesting astronomical objects. The young bright stars within the nebula are part of the nearby star-forming region of CMa R1 in the constellation of Canis Major, which is filled with bright stars and clusters. Also lying close to the Seagull Nebula is the Thor’s Helmet Nebula, an object that was imaged using ESO’s Very Large Telescope (VLT) on ESO’s 50th Anniversary, 5 October 2012, with the help of Brigitte Bailleul — winner of the Tweet Your Way to the VLT! competition (eso1238a).