The sounds of interstellar space

Find out what deep space sounds like in a new video from NASA.

Scifi movies are sometimes criticized when explosions in the void make noise. As the old saying goes, “in space, no one can hear you scream.” Without air there is no sound.

But if that’s true, what was space physicist Don Gurnett talking about when he stated at a NASA press conference in Sept. 2013 that he had heard “the sounds of interstellar space?”

It turns out that space can make music … if you know how to listen.

Gurnett is the James Van Allen professor of physics at the University of Iowa and the principal investigator for t Plasma Wave Science instrument on Voyager 1. At the press conference, he played some plasma wave data for the audience. The sounds, he explained, were solid evidence that Voyager 1 had left the heliosphere.

The heliosphere is a vast bubble of magnetism that surrounds the sun and planets. It is, essentially, the sun’s magnetic field inflated to enormous proportions by the solar wind. Inside the heliosphere is “home.” Outside lies interstellar space, the realm of the stars.

For decades, researchers have been on the edge of their seats, waiting for the Voyager probes to leave. Ironically, it took almost a year for NASA to realize the breakthrough had occurred. The reason is due to the slow cadence of transmissions from the distant spacecraft. Data stored on old-fashioned tape recorders are played back at three to six month intervals. Then it takes more time to process the readings. 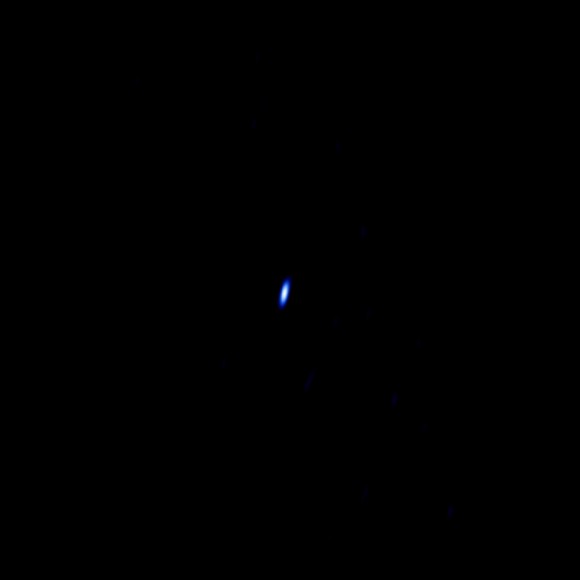 Gurnett recalls the thrill of discovery when some months-old data from the Plasma Wave Instrument reached his desk in the summer of 2013. The distant tones were conclusive: “Voyager 1 had made the crossing.”

Strictly speaking, the plasma wave instrument does not detect sound. Instead it senses waves of electrons in the ionized gas or “plasma” that Voyager travels through. No human ear could hear these plasma waves. Nevertheless, because they occur at audio frequencies, between a few hundred and a few thousand hertz, “we can play the data through a loudspeaker and listen,” says Gurnett. “The pitch and frequency tell us about the density of gas surrounding the spacecraft.”

When Voyager 1 was inside the heliosphere, the tones were low, around 300 Hz, typical of plasma waves coursing through the rarified solar wind. Outside, the frequency jumped to a higher pitch, between 2 and 3 kHz, corresponding to denser gas in the interstellar medium. The transition music to Gurnett’s ears.

So far, Voyager 1 has recorded two outbursts of “interstellar plasma music”–one in Oct-Nov. 2012 and a second in April-May 2013. Both were excited by bursts of solar activity.

The key players are CMEs, hot clouds of gas that blast into space when solar magnetic fields erupt. A typical CME takes 2 or 3 days to reach Earth, and a full year or more to reach Voyager. When a CME passes through the plasma, it excites oscillations akin to fingers strumming the strings on a guitar. Voyager’s Plasma Wave Instrument listens … and learns.

“We’re in a totally unexplored region of space,” says Gurnett. “I expect some surprises out there.”

In particular, Gurnett is hoping for plasma waves not excited by solar storms. He speculates that shock fronts from outside the solar system could be rippling through the interstellar medium. If so, they would excite new plasma waves that Voyager 1 will encounter as it plunges ever deeper into the realm of the stars.

The next “sounds” from out there could be surprising indeed.