The science of the musical brain

Researchers scanned the brains of jazz musicians while the musicians “traded fours.” Results show common brain circuitry for both music and language. 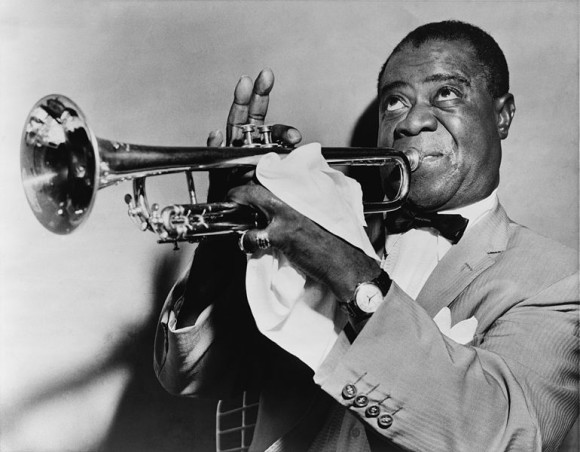 Legendary jazz musician Louis Armstrong. “When two jazz musicians seem lost in thought while trading fours, they aren’t simply waiting for their turn to play,” said Johns Hopkins researcher Charles Limb. “Instead, they are using the syntactic areas of their brain to process what they are hearing so they can respond by playing a new series of notes that hasn’t previously been composed or practiced.” Image via Wikimedia Commons.

A study at Johns Hopkins using functional magnetic resonance imaging (fMRI) to track the brain activity of jazz musicians in the act of “trading fours” showed robust activation of brain areas associated with spoken language and syntax. These parts of the brain are used to interpret the structure of phrases and sentences. At the same time, the act of “trading fours” shut down brain areas in the musicians linked to semantics, that is, the parts of the brain that process the meaning of spoken language.

“Trading fours” is a process in which musicians participate in spontaneous back and forth instrumental exchanges, usually four bars in duration. The musicians introduce new melodies in response to each other’s musical ideas, elaborating and modifying them over the course of a performance.

The results of the study suggest that the brain regions that process syntax aren’t limited to spoken language, according to Charles Limb, M.D., an associate professor in the Department of Otolaryngology-Head and Neck Surgery at the Johns Hopkins University School of Medicine.

Rather, he says, the brain uses the syntactic areas to process communication in general, whether through language or through music.