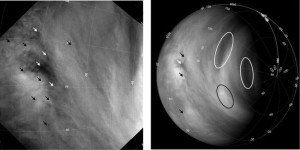 Examples of cloud features identified in Venus Express images and used to monitor wind speeds. Long-term studies based on tracking the motions of several hundred thousand cloud features, indicated here with arrows and ovals, reveal that the average wind speeds on Venus have increased from roughly 300 km/h to 400 km/h over the first six years of the mission. Daily and yearly variations, as well as unexplained differences between consecutive orbits of the spacecraft, were also identified. These images were taken on 27 October 2008. The arrows and ovals are coloured to improve contrast against their respective backgrounds.

Thank you! Your submission has been received!
Oops! Something went wrong while submitting the form.
END_OF_DOCUMENT_TOKEN_TO_BE_REPLACED