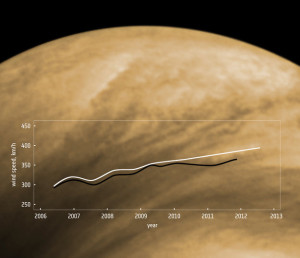 Long-term studies of the atmosphere of Venus by ESA’s Venus Express find that the average wind speeds at low latitudes (between the equator and 50º north or south) have increased from roughly 300 km/h to 400 km/h over the first six years of the mission.
In this graph, the white line shows the data derived from manual cloud tracking, and the black line is from digital tracking methods.

Thank you! Your submission has been received!
Oops! Something went wrong while submitting the form.
END_OF_DOCUMENT_TOKEN_TO_BE_REPLACED