The beautiful Chinese passion flower species Passiflora kwangtungensis may be in danger.

Passiflora contains around 530 species with native ranges throughout the southern United States and Mexico as well as Central and South America. In addition, there are 24 species of Passiflora endemic to the Old World. In China, the native Passiflora exhibit high levels of endemism, seldomly display overlapping distributions, and are in general extremely rare. A new study published in the open access journal Phytokeys provides a morphological revision of the beautiful Chinese species Passiflora kwangtungensis and raises concerns towards its current conservation status. 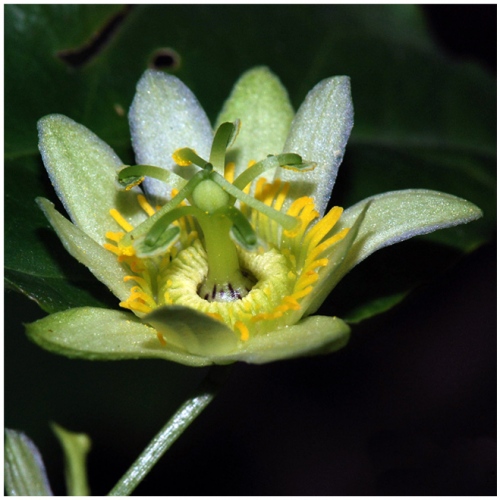 Passiflora kwangtungensis is a critically endangered Chinese species known from the Guangxi, Guangdong, and Jiangxi Provinces. This beautiful plant is characterized by stunning clusters of white – greenish flowers and a small spherical fruit. Field observations of this flower decreased rapidly during the 1970s to 1980s, and it was suspected that this species might have been completely extirpated. No new specimens have been collected for the period of more than 14 years until recently, when small isolated populations of this species have been rediscovered in Hunan Province in a new locality.

While not often discussed, a significant factor affecting the distribution of the native Chinese Passiflora has been the deforestation that has occurred within China over the past 60 years. With the establishment of the People’s Republic of China in 1949, country-wide forest destruction accelerated rapidly with industrialization. Another reason for the rarity of Chinese Passiflora is the geographical isolation of the species, compounded by the fact that the majority of Passiflora are self-incompatible, which may effectively decrease population size even further.

The leading author of this study, Dr. Shawn Krosnick, Department of Biology, Southern Arkansas University, expresses her concerns regarding the conservation status of this beautiful and rare Passiflora representative: “Under IUCN Red List guidelines, Passiflora kwangtungensis should be classified as critically endangered. With just 14 plants observed in Hunan over three years of surveying, this species merits special attention given its small population size, limited genetic diversity, and self-incompatibility. I hope this study will provide the needed justification for protection of P. kwangtungensis, and possibly lead to restoration of this species throughout its ancestral range.”