Tevatron scientists announce their final results on the Higgs particle

After more than 10 years of gathering and analyzing data produced by the U.S. Department of Energy’s Tevatron collider, scientists from the CDF and DZero collaborations have found their strongest indication to date for the long-sought Higgs particle. Squeezing the last bit of information out of 500 trillion collisions produced by the Tevatron for each experiment since March 2001, the final analysis of the data does not settle the question of whether the Higgs particle exists, but gets closer to an answer. The Tevatron scientists unveiled their latest results on July 2, two days before the highly anticipated announcement of the latest Higgs-search results from the Large Hadron Collider in Europe.

“The Tevatron experiments accomplished the goals that we had set with this data sample,” said Fermilab’s Rob Roser, cospokesperson for the CDF experiment at DOE’s Fermi National Accelerator Laboratory. “Our data strongly point toward the existence of the Higgs boson, but it will take results from the experiments at the Large Hadron Collider in Europe to establish a discovery.”

“It is a real cliffhanger,” said DZero co-spokesperson Gregorio Bernardi, physicist at the Laboratory of Nuclear and High Energy Physics, or LPNHE, at the University of Paris VI & VII. “We know exactly what signal we are looking for in our data, and we see strong indications of the production and decay of Higgs bosons in a crucial decay mode with a pair of bottom quarks, which is difficult to observe at the LHC. We are very excited about it.”

The Higgs particle is named after Scottish physicist Peter Higgs, who among other physicists in the 1960s helped develop the theoretical model that explains why some particles have mass and others don’t, a major step toward understanding the origin of mass. The model predicts the existence of a new particle, which has eluded experimental detection ever since. Only high-energy particle colliders such as the Tevatron, which was shut down in September 2011, and the Large Hadron Collider, which produced its first collisions in November 2009, have the chance to produce the Higgs particle. About 1,700 scientists from U.S. institutions, including Fermilab, are working on the LHC experiments. 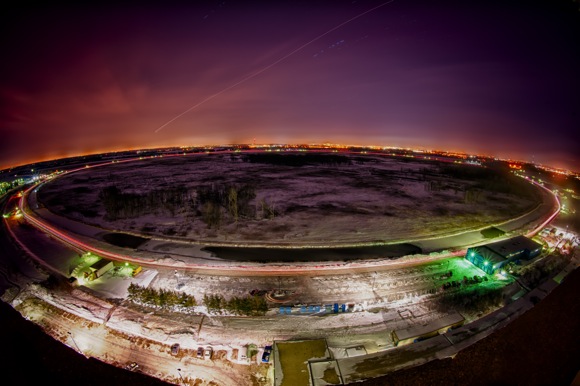 The Tevatron results indicate that the Higgs particle, if it exists, has a mass between 115 and 135 GeV/c2, or about 130 times the mass of the proton.

“During its life, the Tevatron must have produced thousands of Higgs particles, if they actually exist, and it’s up to us to try to find them in the data we have collected,” said Luciano Ristori, co-spokesperson of the CDF experiment and physicist at Fermilab and the Italian Istituto Nazionale di Fisica Nucleare (INFN) . “We have developed sophisticated simulation and analysis programs to identify Higgs-like patterns. Still, it is easier to look for a friend’s face in a sports stadium filled with 100,000 people than to search for a Higgs-like event among trillions of collisions.”

The final Tevatron results corroborate the Higgs search results that scientists from the Tevatron and the LHC presented at physics conferences in March 2012.

The search for the Higgs particle at the Tevatron focuses on a different decay mode than the search at the LHC. According to the theoretical framework known as the Standard Model of Particles, Higgs bosons can decay in many different ways. Just as a vending machine might return the same amount of change using different combinations of coins, the Higgs can decay into different combinations of particles. At the LHC, the experiments can most easily observe the existence of a Higgs particle by searching for its decay into two energetic photons. At the Tevatron, experiments most easily see the decay of a Higgs particle into a pair of bottom quarks.

Tevatron scientists found that the observed Higgs signal in the combined CDF and DZero data in the bottom-quark decay mode has a statistical significance of 2.9 sigma. This means there is only a 1-in-550 chance that the signal is due to a statistical fluctuation. 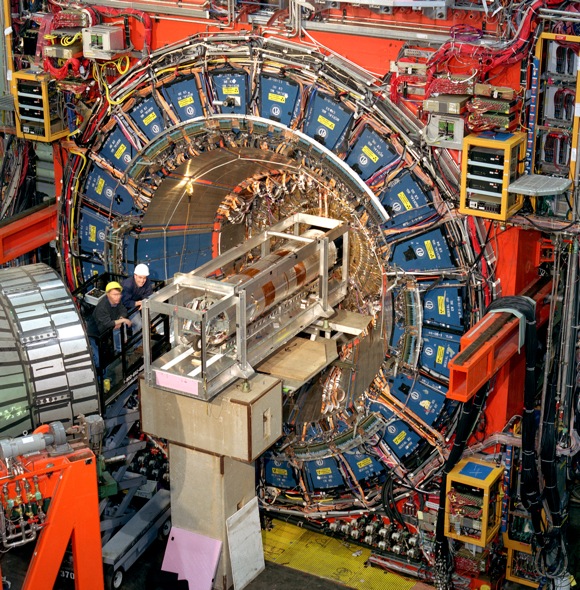 The three-story, 6,000-ton CDF detector recorded snapshots of the particles that emerge when protons and antiprotons collide.

“We achieved a critical step in the search for the Higgs boson,” said Dmitri Denisov, DZero cospokesperson and physicist at Fermilab. “While 5-sigma significance is required for a discovery, it seems unlikely that the Tevatron collisions mimicked a Higgs signal. Nobody expected the Tevatron to get this far when it was built in the 1980s.”

The Tevatron is one of eight particle accelerators and storage rings on the Fermilab site. The largest, operational accelerator at Fermilab now is the 2-mile-circumference Main Injector, which provides particles for the laboratory’s neutrino and muon research programs.

Republished with permission from Fermilab.