When a team of astronomers discovered two black holes in a collection of stars known as a globular cluster, they weren’t sure if the black holes’ presence was a common occurrence or a unique stroke of luck. 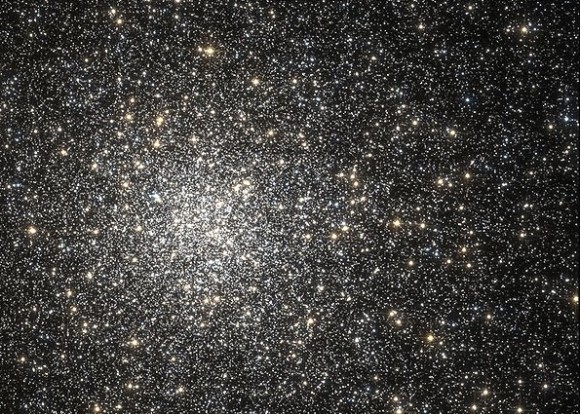 Astronomers recently discovered a black hole at the center of the cluster M62, which is a very dense collection of some of the oldest stars in the universe. Image credit: NASA/ESA via Wikimedia Commons

Astronomers have discovered a new black hole candidate in the globular cluster known as M62.

Last year when a team of astronomers led by a Michigan State University professor discovered two black holes in a collection of stars known as a globular cluster, the team wasn’t sure if the black holes’ presence was a common occurrence or a unique stroke of luck.

Researchers, who report their findings in Astrophysical Journal, are now thinking it was the former.

“This implies that the discovery of the other black hole, in the globular cluster called M22, was not just a fluke,” says Laura Chomiuk, team member and assistant professor of physics and astronomy at Michigan State. “Black holes really may be common in globular clusters.” 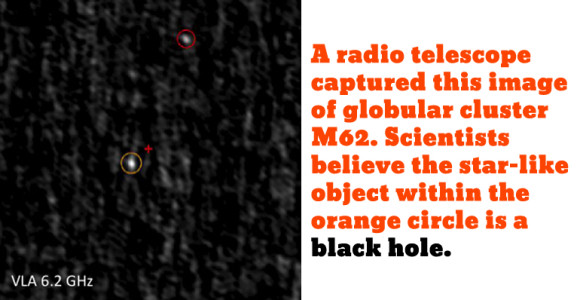 Black holes are stars that have died, collapsed into themselves, and now have such a strong gravitational field that not even light can escape from them.

The globular cluster M62 is located in the constellation Ophiuchus, about 22,000 light years from Earth.

Until recently, astronomers had assumed that the black holes did not occur in globular clusters, which are some of the oldest and densest collections of stars in the universe. Stars are packed together a million times more closely than in the neighborhood of our sun.

There are so many stars in such a condensed area that they often interact with one another. Massive black holes would have the most violent encounters, “sling-shotting” each other out of the cluster.

Last year’s discovery of a pair of black holes in a cluster was especially surprising, Chomiuk says. It had been thought that if two black holes dwelled at the center, they would regularly encounter one another until one shoved the other out.

“I think it’s safe to say that we have discovered a whole new hunting ground for black holes,” says Chomiuk.