Taking the temperature of the universe

Astronomers using a CSIRO radio telescope have taken the Universe’s temperature, and have found that it has cooled down just the way the Big Bang theory predicts. 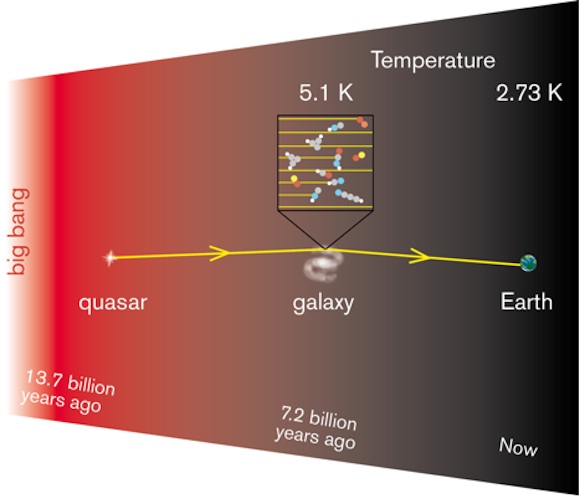 Radio waves from a distant quasar pass through another galaxy on their way to Earth. Changes in the radio waves indicate the temperature of the gas. Image Credit: Onsala Space Observatory

Using the CSIRO Australia Telescope Compact Array near Narrabri, New South Wales, an international team from Sweden, France, Germany and Australia has measured how warm the Universe was when it was half its current age.

“This is the most precise measurement ever made of how the Universe has cooled down during its 13.77 billion year history,” said Dr Robert Braun, Chief Scientist at CSIRO Astronomy and Space Science.

Because light takes time to travel, when we look out into space we see the Universe as it was in the past — as it was when light left the galaxies we are looking at. So to look back half-way into the Universe’s history, we need to look half-way across the Universe.

How can we measure a temperature at such a great distance?

The astronomers studied gas in an unnamed galaxy 7.2 billion light-years away [a redshift of 0.89].

The only thing keeping this gas warm is the cosmic background radiation — the glow left over from the Big Bang.

By chance, there is another powerful galaxy, a quasar (called PKS 1830-211), lying behind the unnamed galaxy. 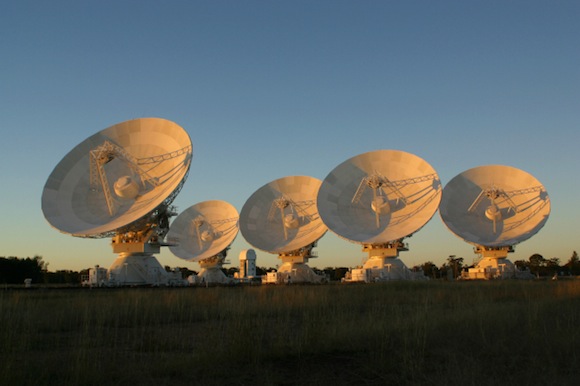 Radio waves from this quasar come through the gas of the foreground galaxy. As they do so, the gas molecules absorb some of the energy of the radio waves. This leaves a distinctive “fingerprint” on the radio waves.

From this “fingerprint” the astronomers calculated the gas’s temperature. They found it to be 5.08 Kelvin (-267.92 degrees Celsius): extremely cold, but still warmer than today’s Universe, which is at 2.73 Kelvin (-270.27 degrees Celsius).

According to the Big Bang theory, the temperature of the cosmic background radiation drops smoothly as the Universe expands. “That’s just what we see in our measurements. The Universe of a few billion years ago was a few degrees warmer than it is now, exactly as the Big Bang Theory predicts,” said research team leader Dr Sebastien Muller of Onsala Space Observatory at Chalmers University of Technology in Sweden.