The two supernovae, identified as SN2213 and SN1000+2016, were discovered in image data obtained via the Canada-France-Hawaii Telescope Legacy Survey. In recent years, various surveys have enabled astronomers to open new windows on the universe, including the discovery over the past decade of super-luminous supernovae that are tens to hundreds of times more luminous than regular supernovae. “The Canada-France-Hawaii Telescope Legacy Survey stands out as the first really deep survey of the sky, covering large volumes of the universe,” said Raymond Carlberg of the University of Toronto’s Department of Astronomy & Astrophysics, a Canadian leader of the Survey. 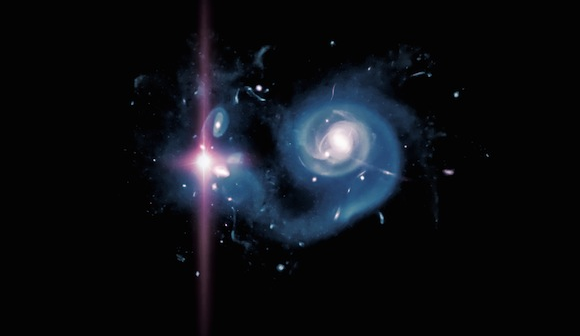 The stellar explosions would have occurred at a time when the universe was much younger and probably soon after the Big Bang.

“The objects are both unusually bright and unusually slow to fade. These are properties that are consistent with what is known as pair-instability supernova, a rare mechanism for explosion which is expected to happen for high-mass stars with almost no metal content. That is, the very first stars to form,” said Carlberg.

All of the processing of the image data was done at U of T using a search technique that first vastly narrows the search to the high redshift star-forming galaxies and then looks for supernovae that are more luminous than normal supernovae and have unusually long fading times — precisely the characteristics of pair-instability supernovae.

The pair-instability explosion mechanism only occurs in stars that are about 150-300 times more massive than the sun, explains Carlberg. No stars that massive form in the current universe because as stars are assembled they start nuclear burning and push away additional gas. However, in the very early days of the universe, the metal abundance of the gas is essentially zero, making it almost transparent so that it can fall on the forming star.

Such massive stars do not last long. They are so hot in the centre that pressure is lost causing a collapse to start, which then heats up the core even more. Eventually enough oxygen and silicon are created that their fusion causes a nuclear explosion much more luminous than other supernova mechanisms.