Finding is related to snow atop sea ice, adding a new dimension to scientific concerns about loss of Arctic ice.

National Science Foundation-funded researchers at Purdue University have discovered that sunlit snow is the major source of atmospheric bromine in the Arctic, the key to unique chemical reactions that purge pollutants and destroy ozone.

The new research also indicates that the surface snowpack above Arctic sea ice plays a previously unappreciated role in the bromine cycle and that loss of sea ice, which been occurring at an increasingly rapid pace in recent years, could have extremely disruptive effects in the balance of atmospheric chemistry in high latitudes. 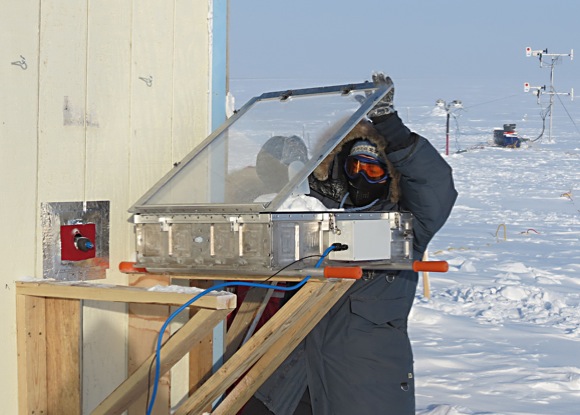 “We are racing to understand exactly what happens in the Arctic and how it affects the planet because it is a delicate balance when it comes to an atmosphere that is hospitable to human life,” said Shepson, who also is a founding member of the Purdue Climate Change Research Center. “The composition of the atmosphere determines air temperatures, weather patterns and is responsible for chemical reactions that clean the air of pollutants.”

A paper detailing the results of the research, some of which was funded by NSF and some by the National Aeronautics and Space Administration, was recently published online at Nature Geoscience.

Ozone in the lower atmosphere behaves differently from the stratospheric ozone involved in the planet’s protective ozone layer. This lower atmosphere ozone is a greenhouse gas that is toxic to humans and plants, but it also is an essential cleaning agent of the atmosphere. 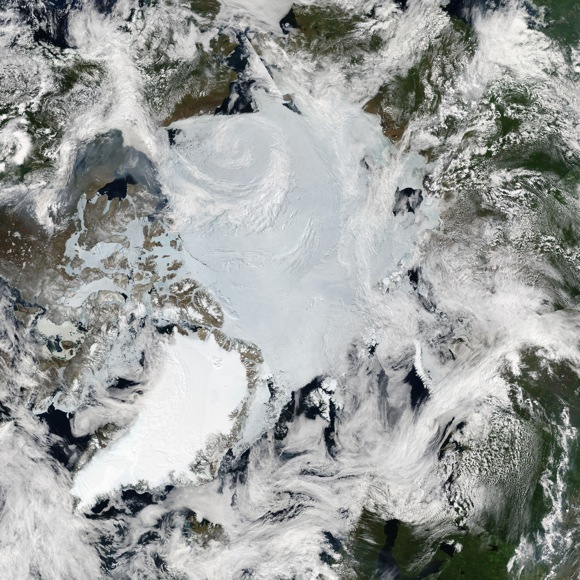 Mosaic of images of the Arctic by MODIS. The brightest spot in the image is Greenland, covered in snowy white. West and north of Greenland, sea ice appears pale gray-blue.

Interactions between sunlight, ozone and water vapor create an “oxidizing agent” that scrubs the atmosphere of most of the pollutants human activity releases into it, Shepson said.

Temperatures at the poles are too cold for the existence of much water vapor and in the Arctic this cleaning process appears instead to rely on reactions on frozen surfaces involving molecular bromine, a halogen gas derived from sea salt.

This gaseous bromine reacts with and destroys atmospheric ozone. This aspect of the bromine chemistry works so efficiently in the Arctic that ozone is often entirely depleted from the atmosphere above sea ice in the spring, Shepson noted.

“This is just a part of atmospheric ozone chemistry that we don’t understand very well, and this unique Arctic chemistry teaches us about the potential role of bromine in other parts of the planet,” he said. “Bromine chemistry mediates the amount of ozone, but it is dependent on snow and sea ice, which means climate change may have important feedbacks with ozone chemistry.”

While it was known that there is more atmospheric bromine in polar regions, the specific source of the natural gaseous bromine has remained in question for several decades, said Pratt, a Polar Programs-funded postdoctoral fellow and lead author of the paper.

“We thought that the fastest and best way to understand what is happening in the Arctic was to go there and do the experiments right where the chemistry is happening,” Pratt said. 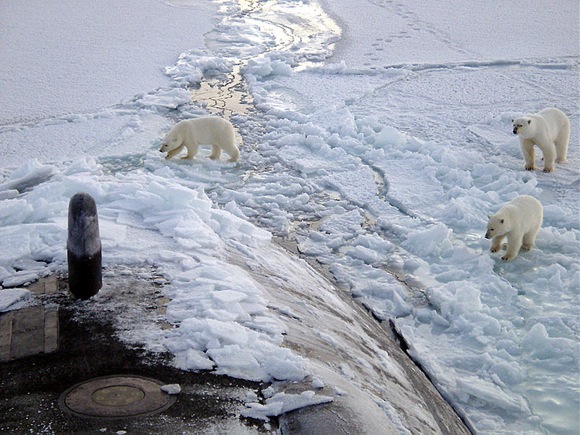 Three Polar bears approach the starboard bow of the Los Angeles-class fast attack submarine USS Honolulu (SSN 718) while surfaced 280 miles from the North Pole. Sighted by a lookout from the bridge (sail) of the submarine, the bears investigated the boat for almost 2 hours before leaving. Credit: Wikimedia

She and Purdue graduate student Kyle Custard performed the experiments in -45 to -34 Celsius (-50 to -30 Fahrenheit) wind chills near Barrow, Alaska. The team examined first-year sea ice, salty icicles and snow and found that the source of the bromine gas was the top surface snow above both sea ice and tundra.

“Sea ice had been thought to be the source of the gaseous bromine,” she said. “We had an ‘of course!’ moment when we realized it was the snow on top of the sea ice. The snow is what is in direct contact with the atmosphere. Sea ice is critical to the process, though. Without it, the snow would fall into the ocean, and this chemistry wouldn’t take place. This is among the reasons why the loss of sea ice in the Arctic will directly impact atmospheric chemistry.”

The team also discovered that sunlight triggered the release of bromine gas from the snow and the presence of ozone increased the production of bromine gas.

“Salts from the ocean and acids from a layer of smog called Arctic haze meet on the frozen surface of the snow, and this unique chemistry occurs,” Pratt said. “It is the interface of the snow and atmosphere that is the key.”

A series of chemical reactions that quickly multiplies the amount of bromine gas present, called the “bromine explosion,” is known to occur in the atmosphere. The team suggests this also occurs in the spaces between the snow crystals and wind then releases the bromine gas up into the air above the snow.

The team performed 10 experiments with snow and ice samples contained in a “snow chamber,” a box constructed of aluminum with a special coating to prevent surface reactions and a clear acrylic top. Clean air with and without ozone was allowed to flow through the chamber and experiments were performed in darkness and in natural sunlight.

The team also measured the levels of bromine monoxide, a compound formed from the reaction of bromine atoms with ozone, through flights of the Purdue Airborne Laboratory for Atmospheric Research.

Shepson is the pilot of this specially equipped aircraft, which he and air operations technical specialist Brian Stirm flew from Indiana to Barrow for these experiments. They found the compound was most prevalent over snow-covered first-year sea ice and tundra, consistent with their snow chamber experiments.

The experiments were performed from March to April 2012 and were part of NASA’s Bromine, Ozone and Mercury Experiment, or BROMEX. The goal of the study is to understand the implications of Arctic sea ice reduction on tropospheric chemistry.

Shepson’s group next plans to perform laboratory studies to test the proposed reaction mechanisms and to return to Barrow to perform more snow chamber experiments.

“In the Arctic, climate change is happening at an accelerated pace,” Pratt said. “A big question is what will happen to atmospheric composition in the Arctic as the temperatures rise and snow and ice decline even further?”