The unexpected slowing of NASA’s Pioneer 10 and 11 spacecraft – the so-called “Pioneer Anomaly” – turns out to be due to the slight, but detectable effect of heat pushing back on the spacecraft, according to a recent paper. The heat emanates from electrical current flowing through instruments and the thermoelectric power supply. The results were published on June 12 in the journal Physical Review Letters.

“The effect is something like when you’re driving a car and the photons from your headlights are pushing you backward,” said Slava Turyshev, the paper’s lead author at NASA’s Jet Propulsion Laboratory, Pasadena, Calif. “It is very subtle.”

Launched in 1972 and 1973 respectively, Pioneer 10 and 11 are on an outward trajectory from our sun. In the early 1980s, navigators saw a deceleration on the two spacecraft, in the direction back toward the sun, as the spacecraft were approaching Saturn. They dismissed it as the effect of dribbles of leftover propellant still in the fuel lines after controllers had cut off the propellant. But by 1998, as the spacecraft kept traveling on their journey and were over 8 billion miles (13 billion kilometers) away from the sun, a group of scientists led by John Anderson of JPL realized there was an actual deceleration of about 300 inches per day squared (0.9 nanometers per second squared). They raised the possibility that this could be some new type of physics that contradicted Einstein’s general theory of relativity. 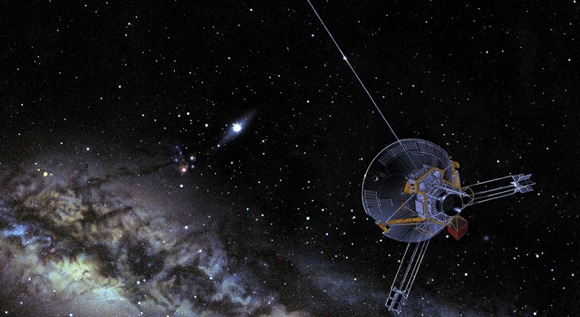 An artist’s view of a Pioneer spacecraft heading into interstellar space. Both Pioneer 10 and 11 are on trajectories that will eventually take them out of our solar system. Image credit: NASA

In 2004, Turyshev decided to start gathering records stored all over the country and analyze the data to see if he could definitively figure out the source of the deceleration. In part, he and colleagues were contemplating a deep space physics mission to investigate the anomaly, and he wanted to be sure there was one before asking NASA for a spacecraft.

He and colleagues went searching for Doppler data, the pattern of data communicated back to Earth from the spacecraft, and telemetry data, the housekeeping data sent back from the spacecraft. At the time these two Pioneers were launched, data were still being stored on punch cards. But Turyshev and colleagues were able to copy digitized files from the computer of JPL navigators who have helped steer the Pioneer spacecraft since the 1970s. They also found over a dozen of boxes of magnetic tapes stored under a staircase at JPL and received files from the National Space Science Data Center at NASA Goddard Space Flight Center, Greenbelt, Md., and worked with NASA Ames Research Center, Moffett Field, Calif., to save some of their boxes of magnetic optical tapes. He collected more than 43 gigabytes of data, which may not seem like a lot now, but is quite a lot of data for the 1970s. He also managed to save a vintage tape machine that was about to be discarded, so he could play the magnetic tapes.

The effort was a labor of love for Turyshev and others. The Planetary Society sent out appeals to its members to help fund the data recovery effort. NASA later also provided funding. In the process, a programmer in Canada, Viktor Toth, heard about the effort and contacted Turyshev. He helped Turyshev create a program that could read the telemetry tapes and clean up the old data.

They saw that what was happening to Pioneer wasn’t happening to other spacecraft, mostly because of the way the spacecraft were built. For example, the Voyager spacecraft are less sensitive to the effect seen on Pioneer, because its thrusters align it along three axes, whereas the Pioneer spacecraft rely on spinning to stay stable.

With all the data newly available, Turyshev and colleagues were able to calculate the heat put out by the electrical subsystems and the decay of plutonium in the Pioneer power sources, which matched the anomalous acceleration seen on both Pioneers.

“The story is finding its conclusion because it turns out that standard physics prevail,” Turyshev said. “While of course it would’ve been exciting to discover a new kind of physics, we did solve a mystery.”

Republished with permission from NASA/JPL.