Stowaways threaten fisheries in the Arctic

The increased sea temperature expected in 2100 will in itself mean that the potential number of species introduced by ships will increase more than sixfold in the Norwegian Archipelago Svalbard in the Arctic Ocean.

Just think of the warty comb jelly or sea walnut, as it is also known. It has caused tremendous damage to fisheries in the Black Sea after arriving in ballast water from its original habitat along the East coast of North America. This example should serve as a warning to everyone to take care and not to introduce new species into our waters.

In the Arctic, the cold water has so far prevented harmful low latitude species from establishing themselves but this will change as the climate becomes warmer. In addition, the expected warmer climate will lead to an increasing number of ships in the Arctic as the routes through the Northeast Passage and the Northwest Passage are becoming ever more navigable. All in all the researchers expect a much greater pressure on the marine ecosystems of the Arctic, where fishing is very important for the population in e.g. Norway and Greenland. 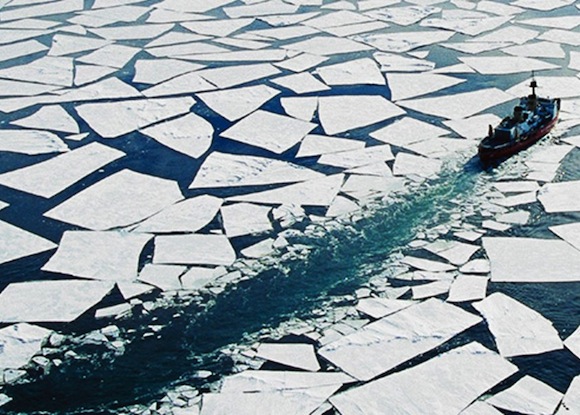 Ships in Isfjorden near Longyearbyen, Svalbard. As the temperature increases the number of ships sailing in the Arctic will increase. Therefore there is good reason to be on guard for possible invaders. Photo: Chris Ware.

An international team of researchers led by PhD candidate Chris Ware from the University of Tromsø in Norway has for the first time been able to calculate the risk of new species establishing themselves in Arctic waters. Specifically, the researchers have investigated the maritime traffic to Svalbard. Chris Ware explains:

“For the first time we have shown that in the future the port of departure will be more similar to the port of destination in the Arctic than it is today with regard to climate and the environment. This development will increase the chance of survival for those organisms that could arrive with ballast water or through biofouling.

One example could be the Red King Crab, a species that would thrive in the Arctic. This is an example of an animal that could change the balance between the current species, as it would become very dominant in the fragile environment,” explains Chris Ware.

Other potential invaders are the shore crab, certain tunicates like Didemnum vexillum and the so-called “Japanese skeleton shrimp” (Caprella mutica).

The survey shows that up to one third of the 155 ships that entered the ports of Svalbard during 2011 came from ports that will in the future have an environmental match with Svalbard, thereby increasing the risk that harmful species, which may be brought in as stowaways on ships, will be able to establish themselves. 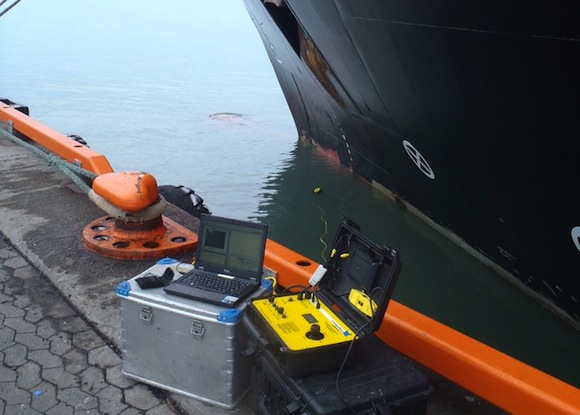 Surveying biofouling with remotely operated underwater vehicle (ROV) in Longyearbyen, Svalbard. In addition to ballast water, biofouling on the hulls is also a source of introduced species. Both sources were investigated in the study. Photo: Chris Ware

The potential donor pool will multiply

The stowaways can arrive either as biofouling on the outside of the ships or via water in the ballast tanks.

In 2011 ships that called at Svalbard emptied their ballast tanks 31 times, producing a total volume of 653,000 cubic meters, equivalent to more than 261 Olympic-size swimming pools. Considering each cubic metre of ballast water may contain hundreds of thousands of organisms, billions of organisms can be introduced by ships every year. Slightly more than half of the vessels had replaced the water at sea as required, for example in the North Sea.

The vessels had connections to four ecoregions with similar environmental conditions. Here the researchers know of a total of 16 introduced species, one of which comes from Svalbard.

14 of the remaining 15 species will be able to act as biofouling on the ships’ hulls. Therefore, if the aim is to keep introduced species out, then only taking ballast water into consideration will not be enough.

Already in 2050 the climate around Svalbard will be more similar to the climate found in the ports to the south where ships to Svalbard typically depart from. This increases the risk that introduced species will survive and compete with the original species around Svalbard.

In 2100, the number of matching ecoregions will increase to nine, increasing the number of known harmful species with connections to Svalbard more than sixfold.

Senior Researcher Mary Wisz from Aarhus University has contributed to the study. She is worried about these figures:

“We consider our results as an ‘early warning’ for what could happen, not just in Svalbard but also in Greenland and other parts of the Arctic.”

What can we do?

“The next step is to find out which stowaways will have the greatest chance to survive the journey in ballast tanks or on the ship hulls, and which are most likely to establish breeding populations after arriving in the Arctic. These questions are the focus of our current research.

Each species has its own physiological characteristics and relationship to the environment, so if we can foresee that some particularly problematic species are at risk of becoming established as the climate warms, we are in a better position to concentrate specific effort and resources to keep them out.”

How to curb harmful species?

The UN’s International Maritime Organization (IMO) is on the verge of entering the Ballast Water Management Convention into force, but this will not happen until 12 months after countries with a combined total of at least 35 % of the World’s commercial fleet (measured in gross tonnage) have ratified the Convention. Denmark and Norway have both done so, although the Convention does not presently apply to Greenland. It is up to Greenland’s government to decide whether or when they want to join.

In Denmark the Danish Nature Agency states that Denmark is working on ensuring that the Convention enters into force as soon as possible, and that the Convention can be expected to come into effect in 2015. Among other things, they have established a partnership on ballast water with the Danish Maritime Administration and the Danish Shipowners Association and, as one of its activities, the partnership organised an international conference in Copenhagen on 1 November.

In addition to ballast water, biofouling on the hulls is also a source of introduced species. All shipowners are interested in alleviating fouling because a coating of algae etc. on the hull increases the consumption of fuel. However, there is no legislation that requires the shipping industry to take special measures to stop stowaways on the outside of the hulls. The UN’s maritime organization has, however, adopted a set of guidelines for this area.