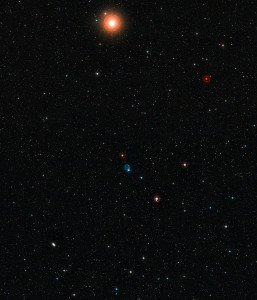 This wide-field view shows the sky around the planetary nebula Abell 33, which appears as the ghostly blue circle near the centre of the picture. This picture was created from photographic material forming part of the Digitized Sky Survey 2. Many faint galaxies are also visible and the bright orange star at the top is Iota Hydri, which is bright enough to be seen with the naked eye.

Thank you! Your submission has been received!
Oops! Something went wrong while submitting the form.
END_OF_DOCUMENT_TOKEN_TO_BE_REPLACED