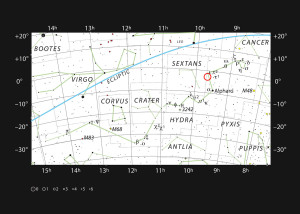 This chart shows the huge and sprawling constellation of Hydra (The Female Water Snake). Most of the stars that can be seen in a dark sky with the unaided eye are marked. The location of the faint planetary nebula Abell 33 is indicated with a red circle. The apparently very bright star on the rim of the nebula is HD 83535, an ordinary hot white star that happens to lie about halfway between the Earth and Abell 33. Although this star is easily seen in binoculars the nebula itself is a very dim object that can only be seen in larger amateur telescopes and is best viewed with an appropriate filter.

Thank you! Your submission has been received!
Oops! Something went wrong while submitting the form.
END_OF_DOCUMENT_TOKEN_TO_BE_REPLACED