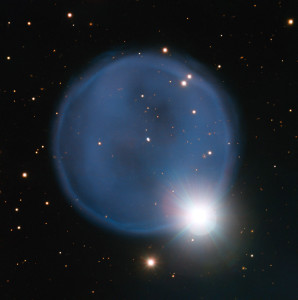 Astronomers using ESO’s Very Large Telescope in Chile have captured this eye-catching image of planetary nebula Abell 33. Created when an aging star blew off its outer layers, this beautiful blue bubble is, by chance, aligned with a foreground star, and bears an uncanny resemblance to a diamond engagement ring. This cosmic gem is unusually symmetric, appearing to be almost perfectly circular on the sky.

Thank you! Your submission has been received!
Oops! Something went wrong while submitting the form.
END_OF_DOCUMENT_TOKEN_TO_BE_REPLACED