Stacking up a clearer picture of the universe

Researchers have proven a new technique that will provide a clearer picture of the universe’s history and be used with the next generation of radio telescopes such as the Square Kilometre Array (SKA).

In research published today in the Monthly Notices of the Royal Astronomical Society, ICRAR PhD Candidate Jacinta Delhaize has studied distant galaxies en masse to determine one of their important properties – how much hydrogen they contain – by ‘stacking’ their signals.

As astronomers use telescopes to peer into space, they get a glimpse at what the Universe was like in the past, often billions of years ago. This allows them to compare the present state of the Universe to its history and map how it’s changed over time, giving clues to its origins and future. 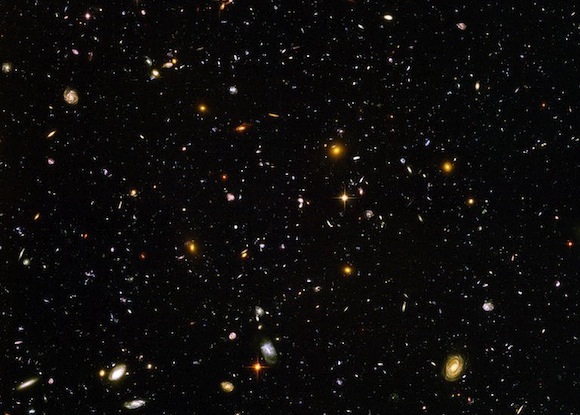 Jacinta studies distant galaxies like those shown in this image from the Hubble Space Telescope, using the new ‘stacking’ technique to gather information only available through radio telescope observations. Credit: NASA, STScI, and ESA.

“Distant, younger, galaxies look very different to nearby galaxies, which means that they’ve changed, or evolved, over time,” said Delhaize. “The challenge is to try and figure out what physical properties within the galaxy have changed, and how and why this has happened.”

Delhaize said that one of the pieces of the puzzle is hydrogen gas and how much of it galaxies contained through the history of the Universe.

“Hydrogen is the building block of the Universe, it’s what stars form from and what keeps a galaxy ‘alive’,” said Delhaize.

“Galaxies in the past formed stars at a much faster rate than galaxies now. We think that past galaxies had more hydrogen, and that might be why their star formation rate is higher.

Delhaize and her supervisors set out to observe how much hydrogen was in far away galaxies, but the faint radio signals of this distant hydrogen gas are almost impossible to detect directly. This is where the new stacking technique comes in.

To gather enough data for her research, Delhaize combined weak signals from thousands of individual galaxies, stacking them to produce a strong averaged signal that is easier to study. 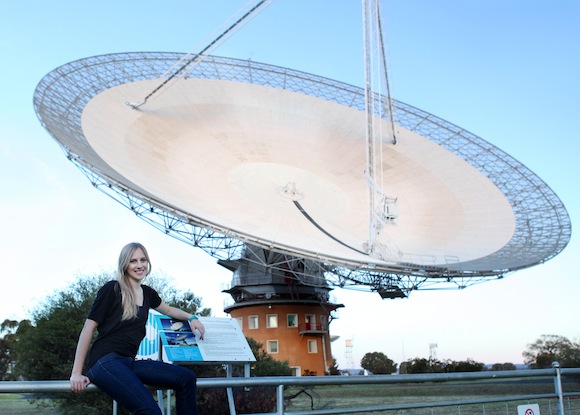 “What we are trying to achieve with stacking is sort of like detecting a faint whisper in a room full of people shouting,” said Delhaize. “When you combine together thousands of whispers, you get a shout that you can hear above a noisy room, just like combining the radio light from thousands of galaxies to detect them above the background.”

The research used CSIRO’s Parkes radio telescope to survey a large section of the sky for 87 hours, collecting signals from hydrogen over an unmatched volume of space and up to two billion years back in time.

“The Parkes telescope views a big section of the sky at once, so it was quick to survey the large field we chose for our study,” said ICRAR Deputy Director and Jacinta’s supervisor, Professor Lister Staveley-Smith.

Delhaize said observing such a large volume of space meant that she could accurately calculate the average amount of hydrogen in galaxies at a certain distance from Earth, corresponding to a particular period in the Universe’s history. This provides information that can be used in simulations of the Universe’s evolution and clues to how galaxies formed and changed over time.

Next generation telescopes like the international Square Kilometre Array (SKA) and CSIRO’s Australian SKA Pathfinder (ASKAP) will be able to observe even larger volumes of the Universe with higher resolution.

“That makes them fast, accurate and perfect for studying the distant Universe. We can use the stacking technique to get every last piece of valuable information out of their observations,” said Delhaize. “Bring on ASKAP and the SKA!”