The streaks emanating from this galaxy are hot young stars, encased in wispy streams of gas torn away from the galaxy as it moves through space. 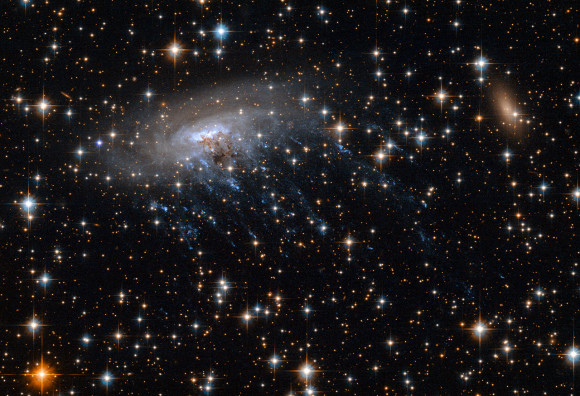 Spiral galaxy ESO 137-001 as seen by the Hubble Space Telescope.

This new Hubble image shows spiral galaxy ESO 137-001, framed against a bright background as it moves through the heart of galaxy cluster Abell 3627. This cluster is violently ripping the spiral’s entrails out into space, leaving bright blue streaks as telltale clues to this cosmic crime.

These streaks are actually hot young stars, encased in wispy streams of gas that are being torn away from the galaxy by its surroundings as it moves through space.

This violent galactic disrobing is due to a process known as ram pressure stripping — a drag force felt by an object moving through a fluid. The fluid in question here is superheated gas, which lurks at the centers of galaxy clusters.