Want to find distant planets? Our own sun offers clues

A new study teaches us about the formation of our own solar system, and might also aid in the search for other stars orbited by habitable planets.

Comets and meteorites contain clues to our solar system’s earliest days. But some of the findings are puzzle pieces that don’t seem to fit well together. A new set of theoretical models from Carnegie’s Alan Boss shows how an outburst event in our sun’s formative years could explain some of this disparate evidence. His work could have implications for the hunt for habitable planets outside of our solar system. It is published by The Astrophysical Journal. 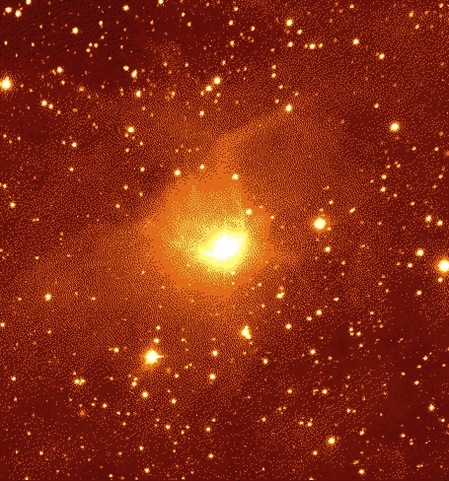 Modeling results show where the injected gas and dust ended ups only 34 years after being injected at the disk’s surface. It was injected 9 astronomical units from the central prostar and is now in the disk’s midplane. The outer edge shown is 10 astronomical units from the central prostar. Mixing and transport are still underway and the underlying spiral arms that drive the mixing and transport can be seen. Image courtesy of Alan Boss.

One way to study the solar system’s formative period is to look for samples of small crystalline particles that were formed at high temperatures but now exist in icy comets. Another is to analyze the traces of isotopes—versions of elements with the same number of protons, but a different number of neutrons—found in primitive meteorites. These isotopes decay and turn into different, so-called daughter, elements. The initial abundances of these isotopes tell researchers where the isotopes may have come from, and can give clues as to how they traveled around the early solar system.

Stars are surrounded by disks of rotating gas during the early stages of their lives. Observations of young stars that still have these gas disks demonstrate that sun-like stars undergo periodic bursts, lasting about 100 years each, during which mass is transferred from the disk to the young star.

But analysis of particles and isotopes from comets and meteorites present a mixed picture of solar system formation, more complicated than just a one-way movement of matter from the disk to the star.

The heat-formed crystalline grains found in icy comets imply significant mixing and outward movement of matter from close to the star to the outer edges of the solar system. Some isotopes, such as aluminum, support this view. However, isotopes of the element oxygen seem to paint a different picture.

Boss’ new model demonstrates how a phase of marginal gravitational instability in the gas disk surrounding a proto-sun, leading to an outburst phase, can explain all of these findings. The results are applicable to stars with a variety of masses and disk sizes. According to the model, the instability can cause a relatively rapid transportation of matter between the star and the gas disk, where matter is moved both inward and outward. This accounts for the presence of heat-formed crystalline particles in comets from the solar system’s outer reaches.

According to the model, the ratios of aluminum isotopes can be explained by the parent isotope having been injected in a one-time event into the planet-forming disk by a shock wave from an exploding star and then traveling both inward and outward in the disk. The reason oxygen isotopes are present in a different pattern is because they are derived from sustained chemical reactions occurring on the surface of the outer solar nebula, rather than from a one-time event.

“These results not only teach us about the formation of our own solar system, but also could aid us in the search for other stars orbited by habitable planets,” Boss said. “Understanding the mixing and transport processes that occur around Sun-like stars could give us clues about which of their surrounding planets might have conditions similar to our own.”