Snapping turtles are surviving in urban areas as their natural habitats are being polluted or developed for construction projects. 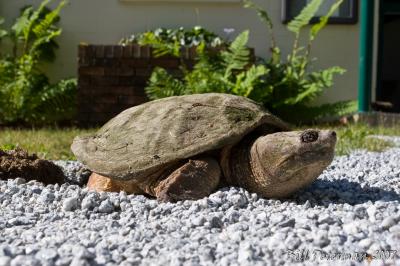 While snapping turtles are not aggressive animals, researchers warn not to approach the animals if they are spotted nearby. Photo credit: Bill Peterman/University of Missouri

In the Midwest, people have a fear of encountering snapping turtles while swimming in local ponds, lakes and rivers. Now in a new study, a University of Missouri researcher has found that snapping turtles are surviving in urban areas as their natural habitats are being polluted or developed for construction projects. One solution is for people to stop using so many chemicals that are eventually dumped into the waterways, the scientist said.

“Snapping turtles are animals that can live in almost any aquatic habitat as long as their basic needs for survival are met,” said Bill Peterman, a post-doctoral researcher in the Division of Biological Sciences at MU. “Unfortunately, suitable aquatic habitats for turtles are being degraded by pollution or completely lost due to development. We found that snapping turtles can persist in urbanized areas, despite the potential for more interaction with humans.”

Peterman said that reducing negative inputs, such as waste and harmful chemicals, into waterways will help restore snapping turtles’ habitats. Engaging in this type of environmental action also will increase biodiversity in those habitats and improve the quality of life to all species that call those habitats home. 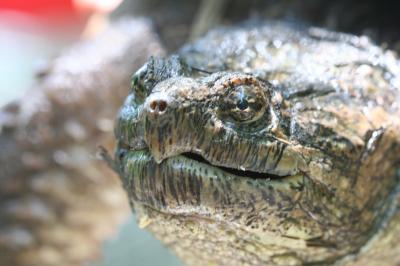 Snapping turtles are animals that can live in almost any aquatic habitat as long as their basic needs for survival are met. Photo credit: Bill Peterman/University of Missouri

However, even though turtles are living in urban areas, Peterman says people have nothing to fear.

“Everyone has a snapping turtle story, but some are just too far-fetched and lead to false accusations,” Peterman said. “In reality, snapping turtles aren’t aggressive animals and won’t bite unless they are provoked. So, if you should happen to see one around your property, simply leave it alone and let it go about its business.”

“While we didn’t study whether the snapping turtle populations were increasing or decreasing, we regularly saw hatchling and juvenile snapping turtles,” Peterman said. “Snapping turtles may not be the first animals that come to mind when thinking about urban wildlife, but if we continue to improve waterways in more places, such as big cities, than the species can coexist peacefully.”