“Most people are puzzled by the existence of singing mice, but in reality many rodents produce complex vocalizations, including mice, rats and even pet hamsters.” – Bret Pasch

Two species of tawny brown singing mice that live deep in the mountain cloud forests of Costa Rica and Panama set their boundaries by emitting high-pitched trills, researchers at The University of Texas at Austin have discovered. 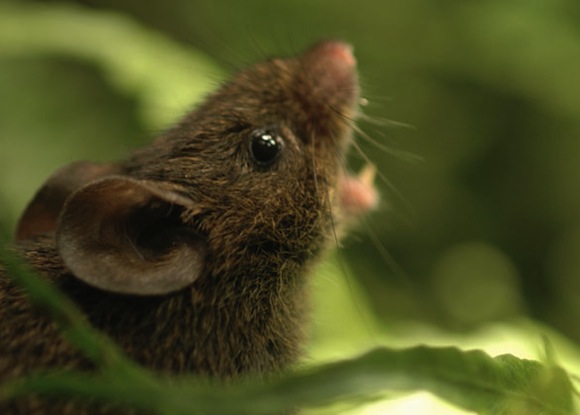 Although males of both the Alston’s singing mouse (Scotinomys teguina) and Chiriqui singing mouse (S. xerampelinus) sing to attract mates and repel rivals within their respective species, the findings show for the first time that communication is being used to create geographic boundaries between species.

In this case, the smaller Alston’s mouse steers clear of its larger cousin, the Chiriqui.

“Most people are puzzled by the existence of singing mice, but in reality many rodents produce complex vocalizations, including mice, rats and even pet hamsters,” said Bret Pasch, a postdoctoral fellow in the Department of Integrative Biology and lead author on the paper, which was published online in The American Naturalist. “Often they’re high-pitched and above the range of human hearing.”

Both singing mouse species produce vocalizations that are barely audible to humans. Alston’s singing mice are smaller and more submissive than Chiriqui singing mice, and they have longer, higher-pitched songs than their larger cousins.

“Songs consist of a set of rapidly repeated notes, called trills,” said Pasch. “Notes are produced each time an animal opens and closes its tiny mouth, roughly 15 times per second.”

“A long-standing question in biology is why some animals are found in particular places and not others. What factors govern the distribution of species across space?” said Pasch.

Using field and laboratory experiments, Pasch and his colleagues discovered that temperature regimes appear to limit how far down the mountain the larger Chiriqui mice can spread. They do not tolerate heat well and prefer the cooler temperatures of the higher altitudes. These dominant mice sing in response to potential intruders of either species and actively approach both types of songs. Conversely, temperature-tolerant Alston’s mice will readily spread higher into cooler habitats if their larger cousins are removed from the equation. However, when an Alston’s mouse hears the call of his bigger cousin, he ceases singing and flees to avoid a confrontation, declaring defeat before the battle has even begun.

“The use of communication in mediating species limits is the major finding of our study and provides insight into how large-scale patterns are generated by individual interactions,” said Pasch.

Steven Phelps, one of Pasch’s co-authors and an associate professor of integrative biology at The University of Texas at Austin, studies the genetics of the singing mice in an effort to understand and identify genes that affect language in humans.

Via The University of Texas