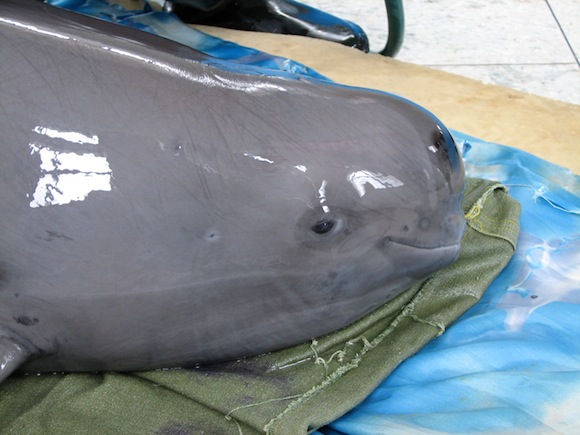 These porpoises live in one of the world’s busiest waterways, the Yangtze River in China, where shipping, dredging, and underwater construction is constant. Photo by Aran Mooney, Woods Hole Oceanographic Institution

The Yangtze finless porpoise, which inhabits the high-traffic waters near the Three Gorges Dam in China, is highly endangered, with only about 1,000 animals alive today. Scientists from Woods Hole Oceanographic Institution (WHOI) and their Chinese colleagues are using medical technology to shed new light on this species’ critical sense of hearing in a waterway punctuated by constant shipping, dredging, and underwater construction.

“We want to understand how they may be impacted by noise,” said Aran Mooney, a biologist at the Woods Hole Oceanographic Institution (WHOI) and a lead author on the study published online this week in the Journal of Experimental Biology.

Marine mammals such as dolphins and porpoises rely on their hearing to navigate, communicate, and find food in the typically deep, dark, and murky waters they inhabit. But what we know about how they hear has been limited to research on just a few species, particularly bottlenose dolphins, because they are relatively common in marine parks and aquaria. This can be a problem when natural resource managers and regulators base aquatic noise pollution policy decisions on data from a limited number of “representative species” when there are over 70 species of toothed whales or odontocetes that live in a variety of aquatic habitats.

This new research shows how variability in the size and shape of toothed whales’ heads across species can result in marked differences in how they receive sound and how sensitive they are to a range of frequencies.

He and colleagues at WHOI and the Institute of Hydrobiology of the Chinese Academy of Sciences in Wuhan, China applied live acoustic sensitivity examinations and computed tomography (CT) scans on Yangtze finless porpoises to begin to identify the auditory variability among toothed whales.

Porpoise populations are declining rapidly worldwide. The Yangtze finless porpoise shares the same habitat as the Baiji river dolphin, seemingly the first toothed whale that has become extinct by humans. Like all toothed whales, the Yangtze finless porpoise do not have external ears. It hears when sound reverberates through its head, throat, jaw, and acoustic fat within the mandible.

Scientists conducted hearing examinations on two Yangtze finless porpoises that were originally from the wild, but have resided at the Institute of Hydrobiology in Wuhan for six and 14 years. The hearing exams were similar to hearing tests regularly given to infants. 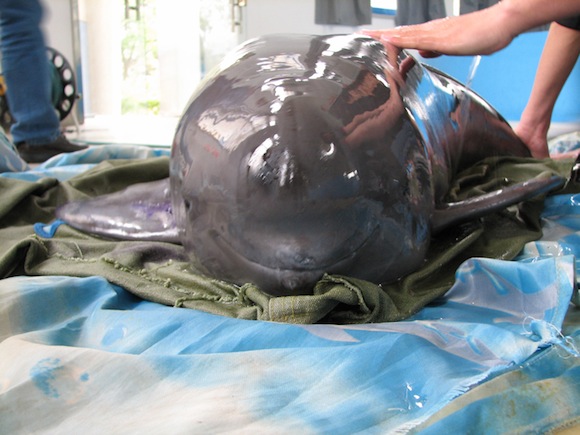 “Porpoises, like babies, can’t tell us if they can hear in their left or right ear, so we measure their hearing physiologically from the surface of the skin,” Mooney said.

Broadband clicks and low, mid, and high frequency tones within a normal threshold were transmitted through silicon suction cup sensors on nine parts of the animal’s head and body. The scientists non-invasively recorded the porpoises’ neuron responses.

The exam results showed that the finless porpoises are sensitive to sound nearly equally around their heads while bottlenose dolphins and beluga whales exhibit a substantial 30-40 decibel difference in sound sensitivity from their jaw to other parts of their head.

The researchers then CT scanned two stranded Yangtze finless porpoise specimens at a hospital associated with Wuhan University to gather information on their skeletal and tissue structure.

“We had the opportunity to scan them in Wuhan and work with the Chinese radiologists, which was very interesting to get a chance to see their facility and how they operate in comparison to WHOI,” said Darlene Ketten, a biologist and director of the Computerized Scanning and Imaging (CSI) facility at WHOI. “We’ve done a lot of these here. But, they had never scanned any porpoises.”

The CT images revealed that the acoustic fat pads in Yangtze finless porpoises are thicker and more disc-like in shape compared to the elongated shape of these fat deposits found in other toothed whales.

“Now that we have some hearing data, we are working on modeling how the conformation of these pads and their dimensions and shapes relate to the frequencies and sensitivities,” Ketten said.

The morphology of the Yangtze finless porpoise implies that it hears omni-directionally, which means it may have difficulty discerning signals among the clutter of constant noise.

“In a noisy environment, they’d have a hard time hearing their prey or their friend. It makes it more difficult for them to conduct basic biological activities such as foraging, communicating, and navigating in the river,” Mooney said.

The differences in hearing sensitivities between the finless porpoise and other species such as bottlenose dolphins and belugas indicate further auditory variations among species. Mooney believes that effective management strategies must consider these variations. He would like to broaden this study to include examinations of other toothed whales, such as the Risso’s dolphin, harbor porpoise, and white-sided dolphin, and continue to examine noise impacts on the endangered Yangtze finless porpoise.