Experts are watching an enormous iceberg that is separating from the Antarctica continent. Roughly the size of Manhattan, the iceberg could threaten shipping lanes. 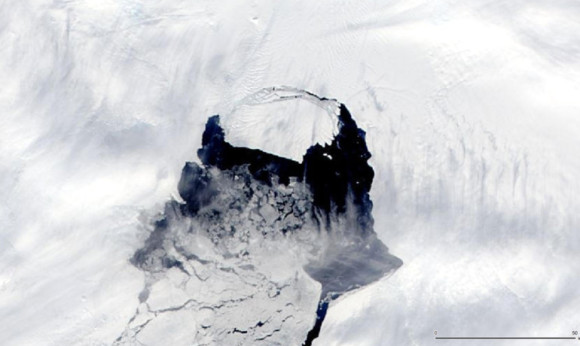 This MODIS image taken by NASA’s Aqua satellite on Nov. 10, 2013, shows an iceberg that was part of the Pine Island Glacier and is now separating from the Antarctica continent. What appears to be a connection point on the top left portion of the iceberg is actually ice debris floating in the water. The iceberg is estimated to be 21 miles by 12 miles (35 km by 20 km) in size. Image credit: NASA

Professor Grant Bigg, from the University of Sheffield’s Department of Geography, is heading the project to monitor the movement and melting of the iceberg, which recently broke off from the Pine Island Glacier. The team is working to predict its likely path and any environmental impact.

“Its current movement does not raise environmental issues, however a previous giant iceberg from this location eventually entered the South Atlantic and if this happens it could potentially pose a hazard to ships,” says Grant.

“If the iceberg stays around the Antarctic coast, it will melt slowly and will eventually add a lot of freshwater that stays in the coastal current, altering the density and affecting the speed of the current.

“Similarly, if it moves north it will melt faster but could alter the overturning rates of the current as it may create a cap of freshwater above the denser seawater.”

Grant says the iceberg wasn’t large enough to have a big impact, but could have an effect. “If these events become more common, there will be a build-up of freshwater which could have lasting effects,” he adds.

The six month project, which has been funded by the National Environment Research Council (NERC), is being co-led by Robert Marsh, from the University of Southampton.

Their work is expected to not only provide a timely warning of any consequences of the iceberg’s release to the shipping industry but also test a technique which could in the future be used by ice hazard warning services.