Scientists have been able to reconstruct, for the first time, the intricate three-dimensional structure of the backbone of early tetrapods, the earliest four-legged animals.

High-energy X-rays and a new data extraction protocol allowed the researchers to reconstruct the backbones of the 360 million year old fossils in exceptional detail and shed new light on how the first vertebrates moved from water onto land.

The international team of scientists was led by Stephanie E. Pierce from The Royal Veterinary College in London and Jennifer A. Clack from the University of Cambridge. It also comprised scientists from Uppsala University (Sweden) and the European Synchrotron Radiation Facility ESRF in Grenoble (France).

The tetrapods are four-limbed vertebrates, which are today represented by amphibians, reptiles, birds and mammals. Around 400 million years ago, early tetrapods were the first vertebrates to make short excursions into shallower waters where they used their four limbs to move around. How this happened and how they then transferred to land is a subject of intense debate among palaeontologists and evolution biologists. 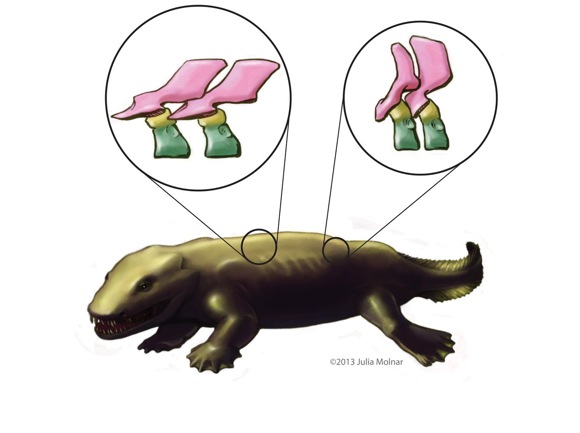 This is an artist’s impression of an Ichthyostega Tetrapod, with the cut-out showing the 3-D reconstruction of two vetrebrae from the study. Image credit: Julia Molnar.

All tetrapods have a backbone, or vertebral column, which is a bony structure common to all other vertebrates including fish, from which tetrapods evolved. A backbone is formed from vertebrae connected in a row – from head to tail. Unlike the backbone of living tetrapods (e.g. humans), in which each vertebra is composed of only one bone, early tetrapods had vertebrae made up of multiple parts.

“For more than 100 years, early tetrapods were thought to have vertebrae composed of three sets of bones – one bone in front, one on top, and a pair behind. But, by peering inside the fossils using synchrotron X-rays we have discovered that this traditional view literally got it back-to-front,” says Stephanie Pierce who is the lead author of the publication.

For the analysis, the European Synchrotron Radiation Facility (ESRF) in France, where the three fossil fragments were scanned with X-rays, applied a data extraction method to reveal tiny details of fossil bones buried deep inside the rock matrix. The fossilised bones are embedded in rock so dense it absorbs most of the X-rays. “Without the new method, it would not have been possible to reveal the elements of the spine in three dimensions with a resolution of 30 µm”, says Sophie Sanchez, a co-author of the publication, from Uppsala University and the ESRF.

In these high-resolution X-ray images, the scientists discovered that what was thought to be the first bone – known as the intercentrum – is actually the last in the series. And, although this might seem like a trivial oversight, this re-arrangement in vertebral structure has over-arching ramifications for the functional evolution of the tetrapod backbone.

Stephanie Pierce explains, “By understanding how each of the bones fit together we can begin to explore the mobility of the spine and test how it may have transferred forces between the limbs during the early stages of land movement”.

But, the findings didn’t end there. One of the animals – known as Ichthyostega – was also found to have an assortment of hitherto unknown skeletal features including a string of bones extending down the middle of it’s chest.

Jennifer Clack says, “These chest bones turned out to be the earliest evolutionary attempt to produce a bony sternum. Such a structure would have strengthened the ribcage of Ichthyostega, permitting it to support it’s body weight on it’s chest while moving about on land.”

This unexpected discovery supports recent work by Pierce and Clack that showed Ichthyostega probably moved by dragging itself across flat ground using synchronous ‘crutching’ motions of its front legs – much like that of a mudskipper or seal. Dr Pierce adds, “The results of this study force us to re-write the textbook on backbone evolution in the earliest limbed animals.”

“At the ESRF, the new data extraction protocol makes it possible to study fossils in dense and heavy rock in unprecedented detail. What we have seen today is only the beginning of more surprises to come,” concludes Sophie Sanchez.