University of Alaska Fairbanks scientists have identified what they think is the ancestral trait that allowed for the evolution of air breathing in vertebrates.

“To breathe air with a lung you need more than a lung, you need neural circuitry that is sensitive to carbon dioxide,” said Michael Harris, a UAF neuroscientist and lead researcher on a project investigating the mechanisms that generate and control breathing. 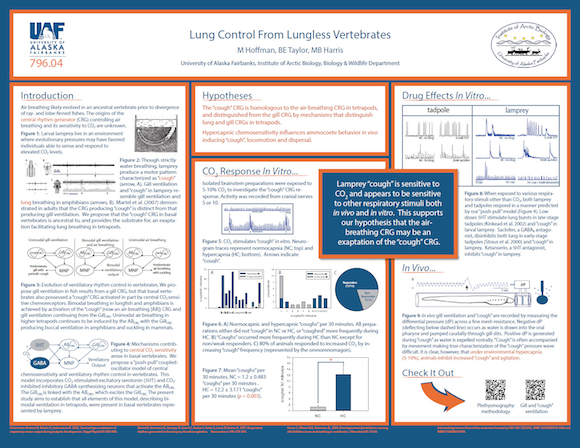 “It’s the neural circuitry that allows air-breathing organisms to take in oxygen, which cells need to convert food into energy, and expel the waste carbon dioxide resulting from that process,” he said. “I’m interested in where that carbon-dioxide-sensitive neural circuit, called a rhythm generator, came from.”

Harris and colleagues think that air breathing likely evolved in an ancestral vertebrate that did not have a lung, but did have a rhythm generator.

“We try to find living examples of primitive non-air-breathing ancestors, like lamprey, and then look for evidence of a rhythm generator that did something other than air breathing,” Harris said.

Lampreys are ancient fish that have characteristics similar to the first vertebrates. They do not have lungs and do not breathe air. As larvae, they live in tubes dug into soft mud and breathe and feed by pumping water through their bodies. When mud or debris clogs a lamprey’s tube, they use a cough-like behavior to expel water and clear the tube. A rhythm generator in their brain controls that behavior.

The video clip below recorded in Harris’ lab shows the difference between gill ventilation and a ‘cough’ in a larval lamprey. The ‘cough’ occurs at about the 9 second mark.

“We thought the lamprey ‘cough’ closely resembled air breathing in amphibians,” said Harris. “When we removed the brains from lampreys and measured nerve activity that would normally be associated with breathing, we found patterns that resemble breathing and found that the rhythm generator was sensitive to carbon dioxide.”

Air breathing evolved in fish and allowed the movement of vertebrates to land and the evolution of reptiles, birds and mammals. Without a carbon-dioxide-sensitive rhythm generator, the structure that would become the lung might not have worked as a lung.

“The evolution of lung breathing may be a repurposing of carbon dioxide sensitive cough that already existed in lungless vertebrates, like the lamprey,” said Harris.