With a radius about 1.2 times that of Earth and a mass equal to about 1.7 times Earth’s, Kepler-78b has a density that’s the same as Earth’s, suggesting that it is also made primarily of rock and iron.

A team of astronomers has found the first Earth-sized planet outside the solar system that has a rocky composition like that of Earth. This exoplanet, known as Kepler-78b, orbits its star very closely every 8.5 hours, making it much too hot to support life. The results are being published in the journal Nature. 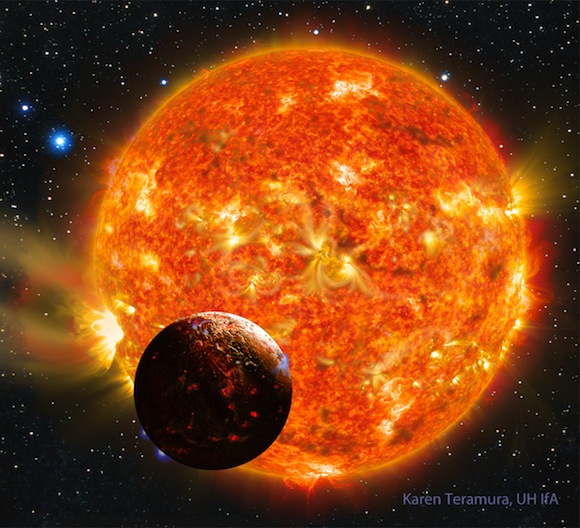 Artist’s impression of the planet Kepler-78b and its host star. Art by Karen Teramura (UHIfA)

This Earth-sized planet was discovered using data from NASA’s Kepler Space Telescope, and confirmed and characterized with the W. M. Keck Observatory.

Every 8.5 hours the planet passes in front of its host star, blocking a small fraction of the starlight. These telltale dimmings were picked up by researchers analyzing the Kepler data.

The team led by Dr. Andrew Howard (Institute for Astronomy, University of Hawaii at Manoa) then measured the mass of the planet with the Keck Observatory on Mauna Kea, in Hawaii. Using the ten-meter Keck I telescope fitted with the HIRES instrument, the team employed the radial velocity method to measure how much an orbiting planet causes its star to wobble, to determine the planet’s mass. This is another excellent example of the synergy between the Kepler survey, which has identified more than 3,000 potential exoplanet candidates, and Keck Observatory, which plays a leading role in conducting precise Doppler measurements of the exoplanet candidates.

A handful of planets the size or mass of Earth have been discovered recently. This is the first one with both quantities measured. “When you have both the size and the mass of an object, you can calculate its density, and thereby determine what it is made of,” explained Howard.

With a radius about 1.2 times that of Earth and a mass equal to about 1.7 times Earth’s, Kepler-78b has a density is the same as Earth’s, suggesting that it also made primarily of rock and iron. Its star is slightly smaller and less massive than the sun and is located about 400 light-years from Earth in the constellation Cygnus.

Kepler-78b is a member of a new class of “ultrashort period” planets recently identified by the Kepler spacecraft. These newfound worlds all orbit their stars with orbital periods of less than 12 hours. They’re also small, about one-to-two times the size of Earth. Kepler-78b is the first planet in this new class to have its mass measured. It is a mystery how these planets formed and made it so close to their host stars (only 1 percent of the Earth-sun separation in the case of Kepler-78b).

In a rather unique arrangement, a companion study led by Dr. Francesco Pepe (University of Geneva, Switzerland) that used the same Kepler data but independent radial velocity observations is being published in the same issue. 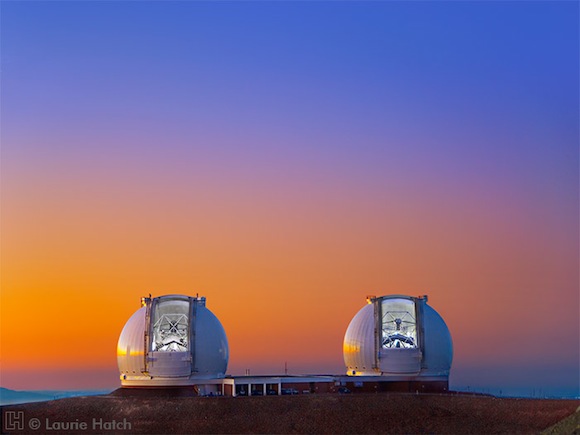 The two studies found very similar results. “The gold standard in science is having your findings reproduced by other researchers,” explained Howard. “In this case, we did not have to wait for this to happen.”

Via University of Hawaii – Institute for Astronomy