Valuable insights from the imitation of the skeleton of natural sea sponges.

Scientists at Johannes Gutenberg University Mainz (JGU) and the Max Planck Institute for Polymer Research (MPI-P) in Germany have created a new synthetic hybrid material with a mineral content of almost 90 percent, yet extremely flexible. They imitated the structural elements found in most sea sponges and recreated the sponge spicules using the natural mineral calcium carbonate and a protein of the sponge. Natural minerals are usually very hard and prickly, as fragile as porcelain. Amazingly, the synthetic spicules are superior to their natural counterparts in terms of flexibility, exhibiting a rubber-like flexibility. The synthetic spicules can, for example, easily be U-shaped without breaking or showing any signs of fracture This highly unusual characteristic, described by the German researchers in the current issue of Science, is mainly due to the part of organic substances in the new hybrid material. It is about ten times as much as in natural spicules. 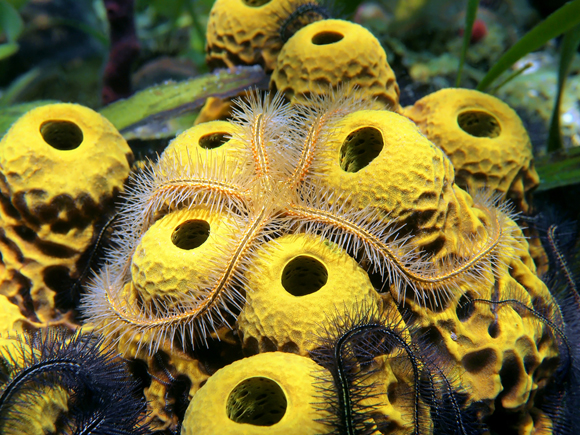 Spicules are structural elements found in most sea sponges. They provide structural support and deter predators. They are very hard, prickly, and even quite difficult to cut with a knife. The spicules of sponges thus offer a perfect example of a lightweight, tough, and impenetrable defense system, which may inspire engineers to create body armors of the future.

The researchers led by Wolfgang Tremel, Professor at Johannes Gutenberg University Mainz, and Hans-Jürgen Butt, Director at the Max Planck Institute for Polymer Research in Mainz, used these natural sponge spicules as a model to cultivate them in the lab. The synthetic spicules were made from calcite (CaCO3) and silicatein-?. The latter is a protein from siliceous sponges that, in nature, catalyzes the formation of silica, which forms the natural silica spicules of sponges. Silicatein-? was used in the lab setting to control the self-organization of the calcite spicules. The synthetic material was self-assembled from an amorphous calcium carbonate intermediate and silicatein and subsequently aged to the final crystalline material. After six months, the synthetic spicules consisted of calcite nanocrystals aligned in a brick wall fashion with the protein embedded like cement in the boundaries between the calcite nanocrystals. The spicules were of 10-300 micrometers in length with a diameter of 5-10 micrometers.

As the scientists, among them chemists, polymer researchers, and the molecular biologist Professor Werner E. G. Müller from the Mainz University Medical Center, also write in their Science publication, the synthetic spicules have yet another special characteristic, i.e., they are able to transmit light waves even when they are bent.