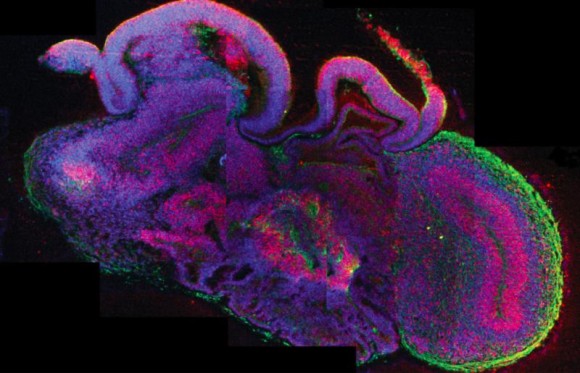 A cross-section of an entire organoid showing development of different brain regions. All cells are in blue, neural stem cells in red, and neurons in green. Image credit: Copyright IMBA/ Madeline A. Lancaster

Complex human brain tissue has been successfully developed in a three-dimensional culture system established in an Austrian laboratory. The method described in the current issue of Nature allows pluripotent stem cells to develop into cerebral organoids — or “mini brains” — that consist of several discrete brain regions.

Instead of using so-called patterning growth factors to achieve this, scientists at the Institute of Molecular Biotechnology (IMBA) of the Austrian Academy of Sciences (OeAW) fine-tuned growth conditions and provided a conducive environment. As a result, intrinsic cues from the stem cells guided the development towards different interdependent brain tissues. Using the “mini brains,” the scientists were also able to model the development of a human neuronal disorder and identify its origin — opening up routes to long hoped-for model systems of the human brain.

The development of the human brain remains one of the greatest mysteries in biology. Derived from a simple tissue, it develops into the most complex natural structure known to man. Studies of the human brain’s development and associated human disorders are extremely difficult, as no scientist has thus far successfully established a three-dimensional culture model of the developing brain as a whole. Now, a research group lead by Dr. Jürgen Knoblich at the Institute of Molecular Biotechnology of the Austrian Academy of Sciences (IMBA) has just changed that.

Starting with established human embryonic stem cell lines and induced pluripotent stem (iPS) cells, the group identified growth conditions that aided the differentiation of the stem cells into several brain tissues. While using media for neuronal induction and differentiation, the group was able to avoid the use of patterning growth factor conditions, which are usually applied in order to generate specific cell identities from stem cells. Dr. Knoblich explains the new method: “We modified an established approach to generate so-called neuroectoderm, a cell layer from which the nervous system derives. Fragments of this tissue were then maintained in a 3D-culture and embedded in droplets of a specific gel that provided a scaffold for complex tissue growth. In order to enhance nutrient absorption, we later transferred the gel droplets to a spinning bioreactor. Within three to four weeks defined brain regions were formed.”

After only 15 — 20 days, so-called “cerebral organoids” formed which consisted of continuous tissue (neuroepithelia) surrounding a fluid-filled cavity that was reminiscent of a cerebral ventricle. After 20 — 30 days, defined brain regions, including a cerebral cortex, retina, meninges as well as choroid plexus, developed. After two months, the mini brains reached a maximum size, but they could survive indefinitely (currently up to 10 months) in the spinning bioreactor. Further growth, however, was not achieved, most likely due to the lack of a circulation system and hence a lack of nutrients and oxygen at the core of the mini brains.

The new method also offers great potential for establishing model systems for human brain disorders. Such models are urgently needed, as the commonly used animal models are of considerably lower complexity, and often do not adequately recapitulate the human disease.
Knoblich’s group has now demonstrated that the mini brains offer great potential as a human model system by analysing the onset of microcephaly, a human genetic disorder in which brain size is significantly reduced. By generating iPS cells from skin tissue of a microcephaly patient, the scientists were able to grow mini brains affected by this disorder. As expected, the patient derived organoids grew to a lesser size.

Further analysis led to a surprising finding: while the neuroepithilial tissue was smaller than in mini brains unaffected by the disorder, increased neuronal outgrowth could be observed. This lead to the hypothesis that, during brain development of patients with microcephaly, the neural differentiation happens prematurely at the expense of stem and progenitor cells which would otherwise contribute to a more pronounced growth in brain size. Further experiments also revealed that a change in the direction in which the stem cells divide might be causal for the disorder.

“In addition to the potential for new insights into the development of human brain disorders, mini brains will also be of great interest to the pharmaceutical and chemical industry,” explains Dr. Madeline A. Lancaster, team member and first author of the publication. “They allow for the testing of therapies against brain defects and other neuronal disorders. Furthermore, they will enable the analysis of the effects that specific chemicals have on brain development.”