A new analysis of data from NASA’s Cassini spacecraft suggests that Saturn’s moons and rings came into being around the time of our solar system’s birth.

Though they are tinted on the surface from recent “pollution,” these bodies date back more than 4 billion years. They are from around the time that the planetary bodies in our neighborhood began to form out of the protoplanetary nebula, the cloud of material still orbiting the Sun after its ignition as a star. The paper, led by Gianrico Filacchione, a Cassini participating scientist at Italy’s National Institute for Astrophysics, Rome, has just been published online by the Astrophysical Journal.

“Studying the Saturnian system helps us understand the chemical and physical evolution of our entire solar system,” said Filacchione. “We know now that understanding this evolution requires not just studying a single moon or ring, but piecing together the relationships intertwining these bodies.” 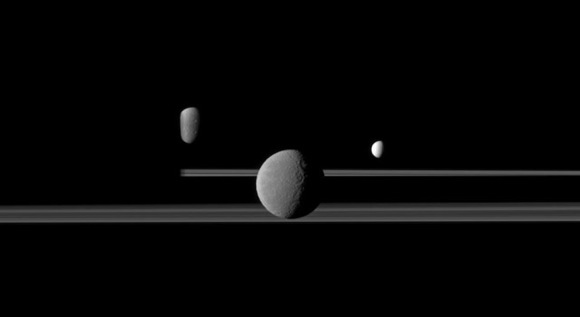 The Cassini spacecraft observes three of Saturn’s moons set against the darkened night side of the planet. Image Credit: NASA/JPL/Space Science Institute

Data from Cassini’s visual and infrared mapping spectrometer (VIMS) have revealed how water ice and also colors — which are the signs of non-water and organic materials — are distributed throughout the Saturnian system. The spectrometer’s data in the visible part of the light spectrum show that coloring on the rings and moons generally is only skin-deep.

Using its infrared range, VIMS also detected abundant water ice — too much to have been deposited by comets or other recent means. So the authors deduce that the water ices must have formed around the time of the birth of the solar system, because Saturn orbits the Sun beyond the so-called “snow line.” Out beyond the snow line, in the outer solar system where Saturn resides, the environment is conducive to preserving water ice, like a deep freezer. Inside the solar system’s “snow line,” the environment is much closer to the Sun’s warm glow, and ices and other volatiles dissipate more easily. 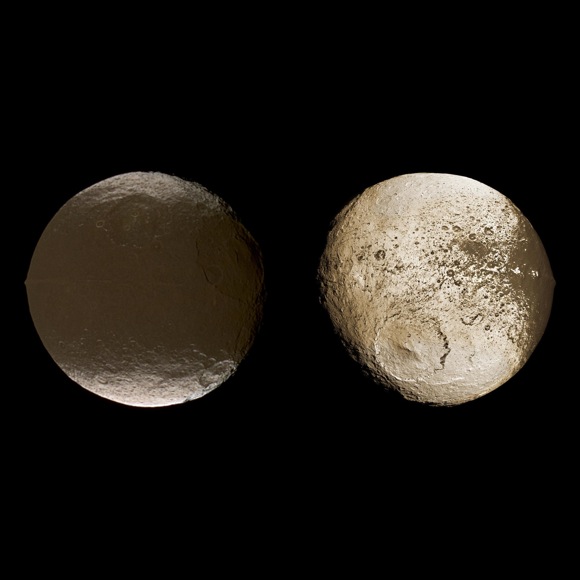 Farther out, the scientists found that the surfaces of Saturn’s moons generally were redder the farther they orbited from Saturn. Phoebe, one of Saturn’s outer moons and an object thought to originate in the far-off Kuiper Belt, seems to be shedding reddish dust that eventually rouges the surface of nearby moons, such as Hyperion and Iapetus.

A rain of meteoroids from outside the system appears to have turned some parts of the main ring system — notably the part of the main rings known as the B ring — a subtle reddish hue. Scientists think the reddish color could be oxidized iron — rust — or polycyclic aromatic hydrocarbons, which could be progenitors of more complex organic molecules. 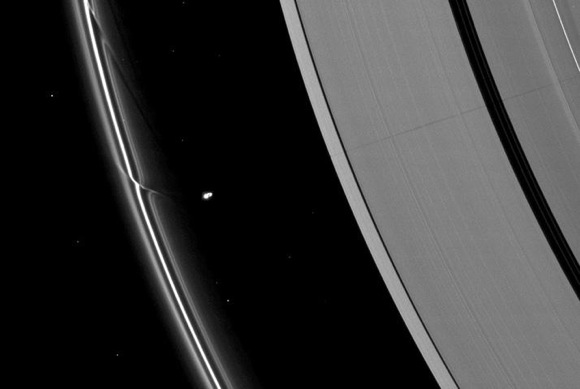 The effects of the small moon Prometheus loom large on two of Saturn’s rings in this image taken a short time before Saturn’s August 2009 equinox. Image credit: NASA/JPL/Space Science Institute

One of the big surprises from this research was the similar reddish coloring of the potato-shaped moon Prometheus and nearby ring particles. Other moons in the area were more whitish.

“The similar reddish tint suggests that Prometheus is constructed from material in Saturn’s rings,” said co-author Bonnie Buratti, a VIMS team member based at NASA’s Jet Propulsion Laboratory, Pasadena, Calif. “Scientists had been wondering whether ring particles could have stuck together to form moons — since the dominant theory was that the rings basically came from satellites being broken up. The coloring gives us some solid proof that it can work the other way around, too.”

“Observing the rings and moons with Cassini gives us an amazing bird’s-eye view of the intricate processes at work in the Saturn system, and perhaps in the evolution of planetary systems as well,” said Linda Spilker, Cassini project scientist, based at JPL. “What an object looks like and how it evolves depends a lot on location, location, location.”