“Improving the exploration of the magnetic field’s function and recording space weather data more accurately allows us to draw conclusions for life on our planet.” – Johanna Wanka

In a dense fog, a Russian Rockot rocket on 22 November 2013 cleared the launchpad of the Baikonur Cosmodrome on schedule at 13:02:15 CET. In the tip of the rocket: three identical satellites to measure the Earth’s magnetic field. A good hour and a half later, at 14:37:48 CET, the report of success: all three satellites separated seamlessly from the carrier rocket and the ground stations Kiruna (Sweden) and Longyearbyen /Svalbard (Norway) were able to establish radio contact with them. GFZ scientists and invited guests observed the start of the mission called SWARM of the European Space Agency in Darmstadt via remote transmission. 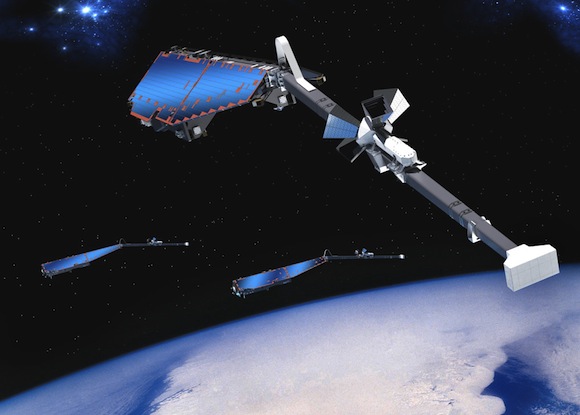 Professor Johanna Wanka, Federal Minister of Education and Research said on the occasion of the perfect start of the mission: “We are very pleased that this European mission has started so smoothly.The magnetic field of the Earth is our shield against cosmic particle radiation. But it is subject to natural fluctuations, from the Earth’s interior or eruptions on the Sun. Improving the exploration of its function and recording space weather data more accurately allows us to draw conclusions for life on our planet.”

Professor Reinhard Huettl, Chairman of the Board of the GFZ German Research Centre for Geosciences pointed out a Potsdam success story: “The three satellites are direct developments from the CHAMP mission of the GFZ, which was launched in 2000. CHAMP with his followers GRACE and SWARM proves to be the founding father of a whole generation of satellites and space-based measurement methods.”

A trio for the magnetic field

SWARM is an ESA mission as part of its “Living Planet” program. “The satellite swarm – hence the name – is to measure the Earth’s magnetic field from space with unprecedented precision for at least four years”, elaborated Professor Huettl. For this, the three satellites fly in an optimized formation: two satellites (SWARM-A, SWARM-B) fly in an altitude of 450 kilometers with a distance of 150 kilometers alongside one another, the third (SWARM-C) ascends into a higher orbit at 530 km altitude. The reason for this complex formation flight lies in the magnetic field itself: it is generated by the flow of electrically conducting liquid iron in the outer core oft he Earth, 2900 kilometers beneath our feet. It is influenced by the conductivity and the dynamics of the overlying mantle (up to 40 kilometers below the Earth’s surface). Finally, the magnetized rocks of the Earth’s crust contribute to the Earth’s magnetic field. In addition, the sun and currents in near-Earth space influence the Earth’s magnetic field from the outside. In order to study these individual components, the total signal of the magnetic field measured by the satellite needs to be separated into its individual components. “From its distance of 150 kilometers, the lower flying SWARM pair can look at the magnetic field of the Earth’s crust with a stereo view”, explains Professor Hermann Lühr , one of the three Principle Investigators of the mission, member of the SWARM Mission Advisory Group and Head of the German SWARM Project Office at the GFZ. “We can therefore analyze this component with very high accuracy.” The third, upper SWARM satellite can in turn precisely determine the force of the magnetic field as it decreases with increasing altitude. Also, over time this satellite flies in a progressively increasing angle to the path of the lower pair. The total measurement will give a picture of the earth’s magnetic field with a precision never achieved before.

Almost as a side effect, the possibility arises to observe space weather more accurately. What is understood by this are flares of our sun, but also magnetic storms generated by distant stars that can interfere with or even paralyze our technical civilization. For example, a strong solar storm in 1989 caused a breakdown of the electricity supply in Canada.

The Role of the GFZ in the SWARM mission

The exploration of the Earth’s magnetic field has been part of the work program of the GFZ German Research Centre for Geosciences since its inception. Furthermore, the GFZ has experience with missions of this kind, particularly with its own satellite missions CHAMP and GRACE. The German Aerospace Center (DLR) therefore decided to set up the SWARM project office at the GFZ. This office serves as the coordination unit and is the interface fort he use of SWARM data and its data products. During the mission, it coordinates the German incentive programs and ESA’s calls for proposals.

“In the preparatory stage, the lessons learned from the CHAMP and GRACE mission supported the technical assistance in planning and manufacturing the satellites”, said Hermann Lühr (GFZ). “CHAMP was the model for the SWARM satellite fleet.” This also applies to data processing and development of superior data products. Hermann Lühr: “The huge amounts of data must be processed, analyzed and condensed into concrete results. GFZ staff with experience from previous satellite missions are working in the European SCARF consortium to generate higher quality data products that are suitable for immediate use.” SCARF stands for Satellite Constellation Application and Research Facility.

The three SWARM satellites together cost about 220 million euros, each weighs 500 kg. Inside the carrier rocket, a four-meter long measuring arm is folded on the back of the five meter long satellite body. This boom is folded out several hours after the deployment of the satellite, once the on-board operating system has been initiated. The reason for this is that the surface of the satellite is equipped with solar cells for the power supply. The magnetic field generated by the current, however, would interfere with the measurement, therefore, the magnetic field measuring instruments are mounted on the measuring arm.

At the tip of the boom, the particularly sensitive apparatus for measuring the magnetic field strength is installed, the sensors for determining the direction of the magnetic field are in its center. In the same position, three star sensors allow the satellite to determine and corrected its location.

To begin with, the three satellites fly parallel on a north-south path at about 88° inclination. Swarm-C is then slowly deflected by 30° per year and thus continues to fly at an increasing angle to the orbit of Swarm-A and -B.