Scientists examined 56 years of fisheries data documenting the return of sockeye salmon to the Fraser River in British Columbia – and the route they chose showed a correlation with changes in the intensity of the geomagnetic field.

The mystery of how salmon navigate across thousands of miles of open ocean to locate their river of origin before journeying upstream to spawn has intrigued biologists for decades, and now a new study may offer a clue to the fishes’ homing strategy.

In the study, scientists examined 56 years of fisheries data documenting the return of sockeye salmon to the Fraser River in British Columbia – and the route they chose around Vancouver Island showed a correlation with changes in the intensity of the geomagnetic field. 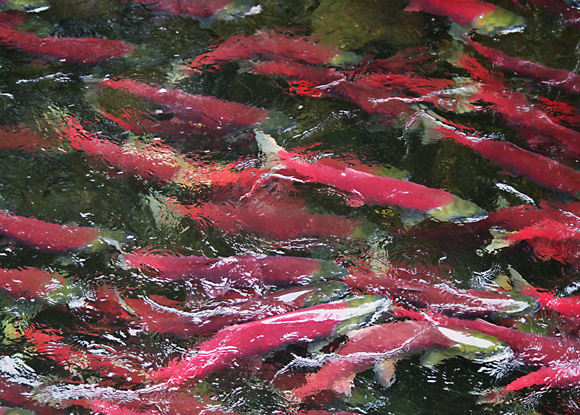 Results of the study, which was supported by Oregon Sea Grant and the National Science Foundation, were published this week in the journal Current Biology.

“What we think happens is that when salmon leave the river system as juveniles and enter the ocean, they imprint the magnetic field – logging it in as a waypoint,” said Nathan Putman, a post-doctoral researcher at Oregon State University and lead author on the study. “It serves as a proxy for geographic location when they return as adults. It gets them close to their river system and then other, finer cues may take over.”

Earth has a predictable, consistent geomagnetic field that weakens as you move from the poles toward the equator. The magnetic North Pole has an intensity gradient of roughly 58 microtesla, while the equator is about 24 microtesla.

Salmon originating from Oregon that have spent two to four years in the northern Pacific Ocean off Canada or Alaska would return as adults, the scientists speculate, journeying southward off the coast until they reached a magnetic field intensity similar to that of their youth. 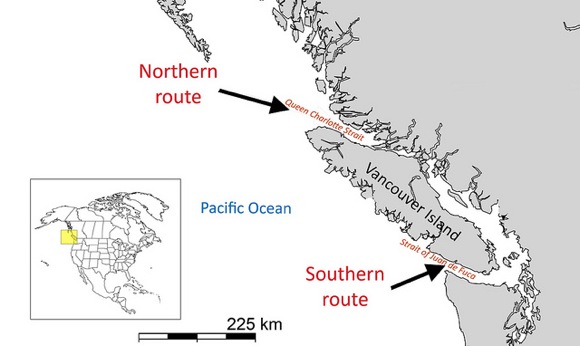 “That should get them to within 50 to 100 kilometers of their own river system and then olfactory cues or some other sense kicks on,” said Putman, who conducts research in OSU’s Department of Fisheries and Wildlife.

Vancouver Island provides a natural laboratory for the study of salmon, the researchers point out. Salmon returning to the Fraser River must detour around the massive island to reach the mouth of the river, choosing a southern or northern route. In their study, the scientists found that the “drift” of the geomagnetic field correlated with which route the salmon chose.

When the normal intensity level for the Fraser River shifted to the north, the sockeye were more likely to choose a northern route for their return. When the field shifted slightly south, they chose a southern route.

“Salmon are a cold-water fish, and all things being equal, they prefer cold water,” said Putman, who earned his Ph.D. in biology from the University of North Carolina at Chapel Hill. “But the fact that they also demonstrate geomagnetic fidelity in choosing a route shows that this could be a major instrument in their biological toolbox to guide their way home.”

Putman said that his previous studies of the Columbia River have shown that the magnetic intensity shifts less than 30 kilometers in either direction over a period of three years, which is about the length of time many salmon spend in the ocean.

“Salmon have to get it right because they only have one chance to make it back to their home river,” Putman said, “so it makes sense that they may have more than one way to get there. The magnetic field is amazingly consistent, so that is a strategy that can withstand the test of time. But they may also use the sun as a compass, track waves breaking on the beach through infrasound, and use smell.”