Rocketing into the northern lights

Auroras are a visible reminder of our planet’s connection to space. The “northern lights” and “southern lights,” as they are more commonly known, are like a rain of highly energized particles from the space around Earth.

Provoked by storms and winds from the sun, electrons trapped inside Earth’s magnetic field (magnetosphere) accelerate down toward the upper atmosphere (ionosphere), where they smash into oxygen and nitrogen molecules and release photons of green, red, and blue light. The light shows can take the shape of waving curtains or rays or diffuse clouds.

At the same time that particles are raining down from space, others are leaving. The “auroral wind” is a strong but intermittent stream of oxygen atoms that flow from the atmosphere into outer space during northern lights shows. Scientists from NASA’s Goddard Space Flight Center and The Aerospace Corporation, together with the support team from the University of Alaska’s Geophysical Institute, launched a rocket from the Poker Flat Research Range to study this little-understood emission from the atmosphere. The NASA-sponsored VISIONS campaign—VISualizing Ion Outflow via Neutral atom imaging during a Substorm—was designed to fly instruments into the aurora for a fifteen-minute close-up examination. 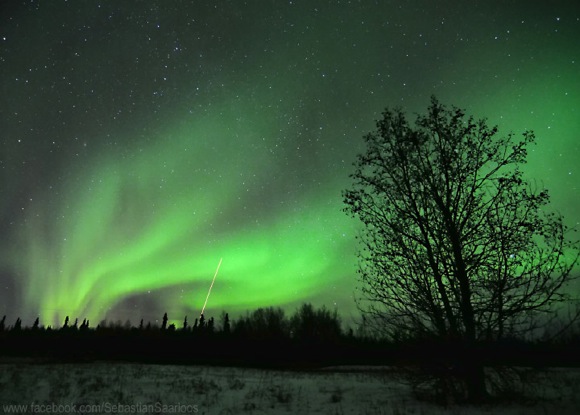 The photo above was taken by Sebastian Saarloos, an amateur photographer who was watching the launch from Delta Junction, Alaska, about 120 miles (195 kilometers) southeast from Poker Flat. He captured the image of the rocket streaking into the aurora at 11:21 p.m. local time on February 6, 2013.

Most of the atmosphere is bound by Earth’s gravity, but a small portion gets heated enough by the aurora that it can break free and flow outwards into near-Earth space. The atoms that form this wind initially travel at just 300 miles per hour—only one percent of the speed needed to overcome gravity and leave Earth’s atmosphere.

“This oxygen would normally never gain enough energy to leave the atmosphere,” said Doug Rowland, principal investigator for VISIONS and a member of NASA’s Space Weather Laboratory. “On the other hand, at very high altitudes, satellite experiments have measured oxygen atoms moving faster than 50 miles per second. These experiments have shown that if oxygen can reach these high altitudes, there are plenty of ways for it to gain even more energy and escape near-Earth space entirely. What we don’t know is how the oxygen gets enough energy to fight against gravity and reach the higher altitudes where these slingshots are active.”

You can observe a short video of the launch below.