Warming western temperatures may mean that some of the creeks and streams that Salt Lake City relies on will dry up several weeks earlier in the summer and fall.

In an example of the challenges western cities will face in a warming world, new research shows that every degree Fahrenheit of warming in the Salt Lake City region would mean a significant drop in the annual flow of streams that provide water to the city. 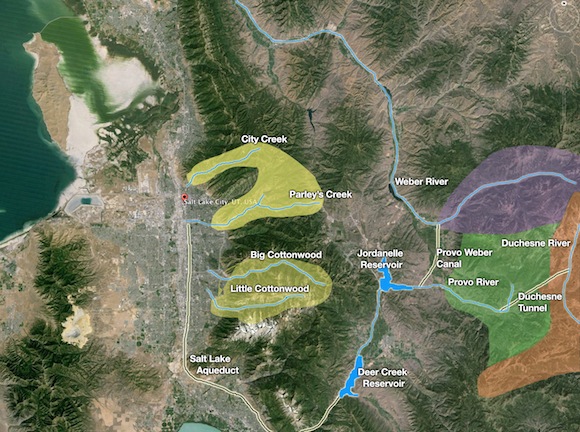 Salt Lake City relies on water from several watersheds including four creeks on the western side of the Wasatch Mountains and water that’s pulled in from the more distant eastern side of the mountains. Map credit: CIRES

While the impacts of a temperature increase would vary among the region’s watersheds, the stream flow would decline by 1.8 to 6.5 percent for each degree of temperature rise, with an average reduction of 3.8 percent. By midcentury, warming western temperatures may mean that some of the creeks and streams that Salt Lake City relies on will dry up several weeks earlier in the summer and fall, according to the detailed analysis of the city’s water supply.

“Many snow-dependent regions follow a consistent pattern in responding to warming,” said National Center for Atmospheric Research (NCAR) scientist Andrew Wood, a co-author. “But it’s important to drill down further to understand the sensitivity of watersheds that matter for individual water supply systems.”

The findings were published today in the journal Earth Interactions. The study may help regional planners make choices about long-term investments, including water storage and land-protection policies.

“Many western water suppliers are aware that climate change will have impacts, but they don’t have detailed information that can help them plan for the future,” said lead author Tim Bardsley of the Cooperative Institute for Research in Environmental Sciences (CIRES). “Because our research team included hydrologists, climate scientists, and water utility experts, we could dig into the issues that mattered most to the operators responsible for making sure clean water flows through taps and sprinklers without interruption.”

CIRES is a joint institute of the National Oceanic and Atmospheric Administration (NOAA) and the University of Colorado Boulder.

In addition to CIRES and NCAR, the research team included experts from the Salt Lake City Department of Public Utilities, NOAA’s Earth System Research Laboratory, and the University of Utah.

The team relied on climate model projections of temperature and precipitation in the area, historical data analysis, and a detailed understanding of the region from which the city utility obtains water. The study also used NOAA streamflow forecasting models that provide information for Salt Lake City’s current water operations and management.

The picture that emerged was similar, in some ways, to previous research on the water in the Interior West: Warmer temperatures will cause more of the region’s precipitation to fall as rain than snow, leading to earlier runoff and less water in creeks and streams in the late summer and fall.

The specifics in the new analysis—which creeks are likely to be affected most and soonest, how water sources on the nearby western flank of the Wasatch Mountains and the more distant eastern flank will fare—are critical to water managers in Salt Lake City.

“We are using the findings of this sensitivity analysis to better understand the range of impacts we might experience under climate change scenarios,” said co-author Laura Briefer, water resources manager at the Salt Lake City Department of Public Utilities. “This is the kind of tool we need to help us adapt to a changing climate, anticipate future changes, and make sound water-resource decisions.”