Reversal of the black widow myth

The Black Widow spider gets its name from the popular belief that female spiders eat their male suitors after mating. However, a new study has shown that the tendency to consume a potential mate is also true of some types of male spider. The study by Lenka Sentenska and Stano Pekar from Masaryk University in the Czech Republic finds that male spiders of the Micaria sociabilis species are more likely to eat the females than be eaten. The paper, published in Springer’s journal Behavioral Ecology and Sociobiology, outlines possible reasons for this behavior. 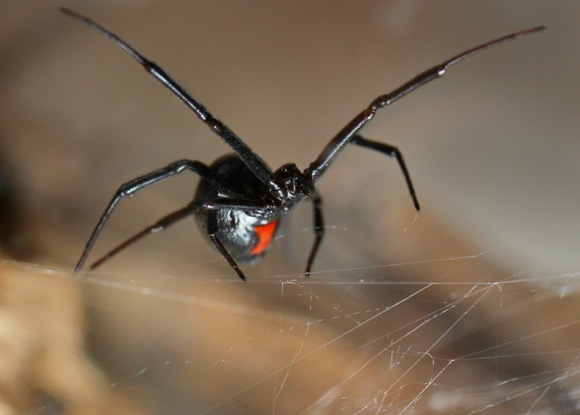 In nature, female choice of mate is commonly seen as the overriding factor affecting male mating success. Sexual cannibalism is a form of female mate choice with low-quality mates more likely to be cannibalized. However, there is not as much evidence about how males may sometimes dictate the choice of partner. The researchers suggest that in the Micaria sociabilis species, reverse cannibalism seen may be a type of male mate choice.

The researchers collected male and female Micaria sociabilis spiders over a two-year period and studied their behavior by mixing males and females of the species at different time points. All spiders were well fed to discount cannibalism due to hunger. The authors observed what happened when they paired young adult male spiders with single female spiders either from the same generation (young female) or from another generation (old female). By pairing males with females of different size, age and mating status, the researchers hoped to be able to identify whether the reversed form of sexual cannibalism was an adaptive mechanism for male mate choice.

Their study found that cannibalism took place early after the first contact and before any mating took place. The researchers also observed that reverse cannibalism differed significantly, depending on what month it was – most of the incidences were in July. Males from the summer generation tended to be bigger than males from the spring generation and they were more cannibalistic. This would suggest that male aggression may be related to male size.

The authors noted that the highest frequency of reverse cannibalism occurred when these larger, young males from the summer generation met old females from the previous spring generation. This suggests they may have based their choice on female age. Female body size, even though considered to be a sign of quality, did not affect rates of cannibalism. The authors also noted no difference in male cannibalization of females who had previously mated or virgin females. This evidence demonstrates that in some species and some cases, the males make a very clear choice about who they will mate with.

The authors remark: “Our study provides an insight into an unusual mating system, which differs significantly from the general model. Even males may choose their potential partners and apparently, in some cases, they can present their choice as extremely as females do by cannibalizing unpreferred mates.”