“People have often thought there’s no upper bound for wind power—that it’s one of the most scalable power sources,” says Harvard applied physicist David Keith. After all, gusts and breezes don’t seem likely to “run out” on a global scale in the way oil wells might run dry.

Yet the latest research in mesoscale atmospheric modeling, published today in the journal Environmental Research Letters, suggests that the generating capacity of large-scale wind farms has been overestimated. 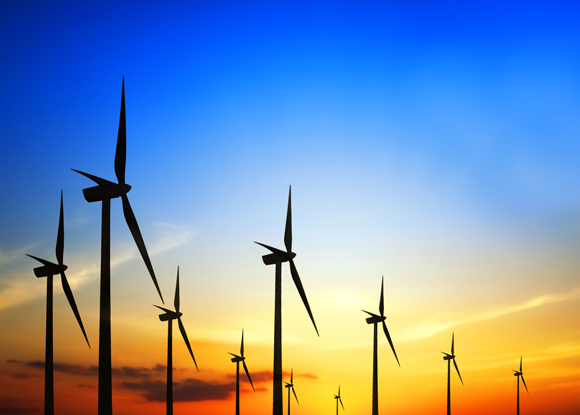 Each wind turbine creates behind it a “wind shadow” in which the air has been slowed down by drag on the turbine’s blades. The ideal wind farm strikes a balance, packing as many turbines onto the land as possible, while also spacing them enough to reduce the impact of these wind shadows. But as wind farms grow larger, they start to interact, and the regional-scale wind patterns matter more.

In short, we may not have access to as much wind power as scientists thought.

An internationally renowned expert on climate science and technology policy, Keith holds appointments as Gordon McKay Professor of Applied Physics at the Harvard School of Engineering and Applied Sciences (SEAS) and as Professor of Public Policy at Harvard Kennedy School. Coauthor Amanda S. Adams was formerly a postdoctoral fellow with Keith and is now assistant professor of geography and Earth sciences at the University of North Carolina at Charlotte.

“One of the inherent challenges of wind energy is that as soon as you start to develop wind farms and harvest the resource, you change the resource, making it difficult to assess what’s really available,” says Adams.

But having a truly accurate estimate matters, of course, in the pursuit of carbon-neutral energy sources. Solar, wind, and hydro power, for example, could all play roles in fulfilling energy needs that are currently met by coal or oil.

“If wind power’s going to make a contribution to global energy requirements that’s serious, 10 or 20 percent or more, then it really has to contribute on the scale of terawatts in the next half-century or less,” says Keith.

If we were to cover the entire Earth with wind farms, he notes, “the system could potentially generate enormous amounts of power, well in excess of 100 terawatts, but at that point my guess, based on our climate modeling, is that the effect of that on global winds, and therefore on climate, would be severe—perhaps bigger than the impact of doubling CO2.”

“Our findings don’t mean that we shouldn’t pursue wind power—wind is much better for the environment than conventional coal—but these geophysical limits may be meaningful if we really want to scale wind power up to supply a third, let’s say, of our primary energy,” Keith adds.

And the climatic effect of turbine drag is not the only constraint; geography and economics matter too.

“It’s clear the theoretical upper limit to wind power is huge, if you don’t care about the impacts of covering the whole world with wind turbines,” says Keith. “What’s not clear—and this is a topic for future research—is what the practical limit to wind power would be if you consider all of the real-world constraints. You’d have to assume that wind turbines need to be located relatively close to where people actually live and where there’s a fairly constant wind supply, and that they have to deal with environmental constraints. You can’t just put them everywhere.”

“The real punch line,” he adds, “is that if you can’t get much more than half a watt out, and you accept that you can’t put them everywhere, then you may start to reach a limit that matters.”

In order to stabilize the Earth’s climate, Keith estimates, the world will need to identify sources for several tens of terawatts of carbon-free power within a human lifetime. In the meantime, policymakers must also decide how to allocate resources to develop new technologies to harness that energy.

In doing so, Keith says, “It’s worth asking about the scalability of each potential energy source—whether it can supply, say, 3 terawatts, which would be 10 percent of our global energy need, or whether it’s more like 0.3 terawatts and 1 percent.”

“Wind power is in a middle ground,” he says. “It is still one of the most scalable renewables, but our research suggests that we will need to pay attention to its limits and climatic impacts if we try to scale it beyond a few terawatts.”