Researches urge government to act now and save polar bears

Polar bear researchers are urging governments to start planning for rapid Arctic ecosystem change to deal with a climate change catastrophe for the animals.

A University of Alberta polar bear researcher and 11 international co-authors are urging governments to start planning for rapid Arctic ecosystem change to deal with a climate change catastrophe for the animals. 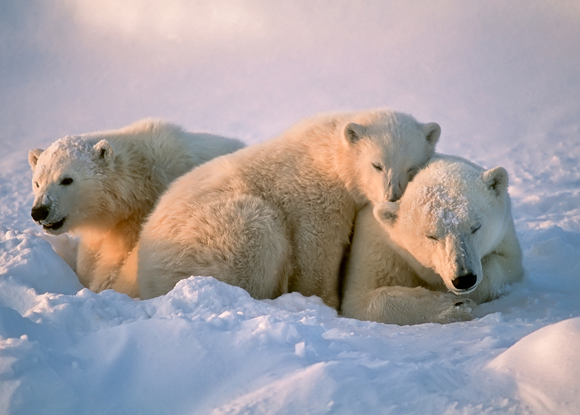 “It’s a fact that early sea ice breakup, late ice freeze-up and the overall reduction in ice pack are taking their toll,” said Derocher. “We want governments to be ready with conservation and management plans for polar bears when a worst-case climate change scenario happens.”

The effects of climate change on polar bears are clear from both observational and modelling studies in many areas where the bears are found. Earlier studies by Derocher and his colleagues show that one very bad ice year could leave hundreds of Hudson Bay polar bears stranded on land for an extended period. “Such an event could erase half of a population in a single year,” Derocher noted.

“The management options for northern communities like Churchill would range from doing nothing, to feeding the bears, moving them somewhere else or euthanizing them,” said Derocher.

The concerned researchers say they’re not telling governments what to do. But they want policy makers and wildlife managers to start planning for both the predicted escalation of Arctic warming and for an off-the-charts, worst-case scenario.

“You’re going to make better decisions if you have time to think about it in advance; it’s a no-brainer,” said Derocher, adding that “consultation with northern residents takes time and the worst time to ask for input is during a crisis.”

The researchers say the options for polar bear management include what Derocher calls a “wild bear park model”—feeding and releasing the bears when freeze-ups allow the animals to get to their hunting grounds. But the paper reports that the cost could run into the millions and could have ramifications for the animals’ long-term behaviour.

The authors of the paper say governments should be aware of the fallout from climate change, and human safety in the North is going to be an increasing challenge.

“Around the world, polar bears are an iconic symbol, so any tragedy would produce massive attention,” said Derocher. “If the warming trend around Hudson Bay took an upward spike, the population of 900 to 1,000 bears in western Hudson Bay would be on the line, so there has to be a plan.”