UC Riverside-led study points to an ancient oxygen-free and hydrogen sulfide-rich ocean that may foreshadow our future.

Oxygen in the atmosphere and ocean rose dramatically about 600 million years ago, coinciding with the first proliferation of animal life. Since then, numerous short-lived biotic events — typically marked by significant climatic perturbations — took place when oxygen concentrations in the ocean dipped episodically. 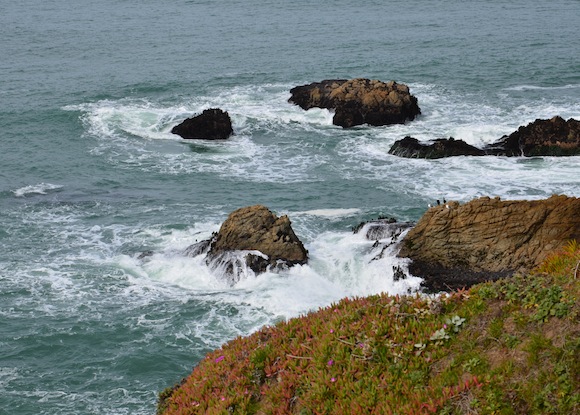 The most studied and extensive of these events occurred 93.9 million years ago. By looking at the chemistry of rocks deposited during that time period, specifically coupled carbon and sulfur isotope data, a research team led by University of California, Riverside biogeochemists reports that oxygen-free and hydrogen sulfide-rich waters extended across roughly five percent of the global ocean during this major climatic perturbation — far more than the modern ocean’s 0.1 percent but much less than previous estimates for this event.

The research suggests that previous estimates of oxygen-free and hydrogen sulfide-rich conditions, or “euxinia,” were too high. Nevertheless, the limited and localized euxinia were still sufficiently widespread to have dramatic effect on the entire ocean’s chemistry and thus biological activity.

“These conditions must have impacted nutrient availability in the ocean and ultimately the spatial and temporal distribution of marine life,” said team member Jeremy D. Owens, a former UC Riverside graduate student, who is now a postdoctoral scientist at the Woods Hole Oceanographic Institution. “Under low-oxygen environments, many biologically important metals and other nutrients are removed from seawater and deposited in the sediments on the seafloor, making them less available for life to flourish.”

“What makes this discovery particularly noteworthy is that we mapped out a landscape of bioessential elements in the ocean that was far more perturbed than we expected, and the impacts on life were big,” said Timothy W. Lyons, a professor of biogeochemistry at UCR, Owens’s former advisor and the principal investigator on the research project.
Study results appear online this week in the Proceedings of the National Academy of Sciences.

Across the event 93.9 million years ago, a major biological extinction in the marine realm has already been documented. Also associated with this event are high levels of carbon dioxide in the atmosphere, which are linked to elevated ocean and atmospheric temperatures. Associated consequences include likely enhanced global rainfall and weathering of the continents, which further shifted the chemistry of the ocean.

“Our work shows that even though only a small portion of the ocean contained toxic and metal-scavenging hydrogen sulfide, it was sufficiently large so that changes to the ocean’s chemistry and biology were likely profound,” Owens said. “What this says is that only portions of the ocean need to contain sulfide to greatly impact biota.”
For their analysis, the researchers collected seafloor mud samples, now rock, from multiple localities in England and Italy. They then performed chemical extraction on the samples to analyze the sulfur isotope compositions in order to estimate the chemistry of the global ocean.

According to the researchers, the importance of their study is elevated by the large amount of previous work on the same interval and thus the extensive availability of supporting data and samples. Yet despite all this past research, the team was able to make a fundamental discovery about the global conditions in the ancient ocean and their impacts on life.

“Today, we are facing rising carbon dioxide contents in the atmosphere through human activities, and the amount of oxygen in the ocean may drop correspondingly in the face of rising seawater temperatures,” Lyons said. “Oxygen is less soluble in warmer water, and there are already suggestions of such decreases. In the face of these concerns, our findings from the warm, oxygen-poor ancient ocean may be a warning shot about yet another possible perturbation to marine ecology in the future.”