“This approach should give policymakers more reliable information than current state-of-the-art methods,” says Dr. Nagiza Samatova, an associate professor of computer science at NC State and co-author of a paper describing the work. “This will hopefully give them more confidence in planning for the hurricane season.” 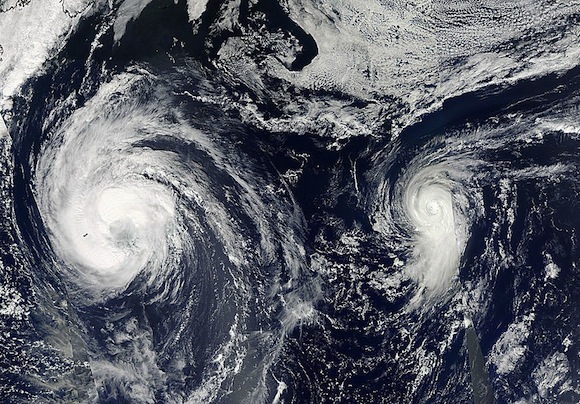 This visible image of Tropical Storm Leslie and Hurricane Michael was taken by the MODIS instrument aboard both NASA’s Aqua and Terra satellites. Image Credit: NASA Goddard/MODIS Rapid Response Team.

Conventional models used to predict seasonal hurricane activity rely on classical statistical methods using historical data. Hurricane predictions are challenging, in part, because there are an enormous number of variables in play – such as temperature and humidity – which need to be entered for different places and different times. This means there are hundreds of thousands of factors to be considered.

The trick is in determining which variables at which times in which places are most significant. This challenge is exacerbated by the fact that we only have approximately 60 years of historical data to plug into the models.

The researchers, including Dr. Fredrick Semazzi (pictured), hope to use their new method to improve our understanding of hurricane behavior. Image Credit: Roger Winstead.

The researchers plan to use the newly identified groups of relevant factors to advance our understanding of the mechanisms that influence hurricane variability and behavior. This could ultimately improve our ability to predict the track of hurricanes, their severity and how global climate change may affect hurricane activity well into the future.