Purple sea urchins have a weapon against ocean acidification

As the carbon content of the ocean continues to increase, purple sea urchins may be able to adapt rapidly to survive.

In the race against climate change and ocean acidification, some sea urchins may still have a few tricks up their spiny sleeves, suggesting that adaptation will likely play a large role for the sea creatures as the carbon content of the ocean increases.

“What we want to know is, given that this is a process that happens over time, can marine animals adapt? Could evolution come to the rescue?” said postdoctoral researcher Morgan Kelly, from UC Santa Barbara’s Department of Ecology, Evolution and Marine Biology. She is a co-author of the paper “Natural variation, and the capacity to adapt to ocean acidification in the keystone sea urchin Strongylocentrotus purpuratus.” The paper was published in the latest edition of the journal Global Change Biology. 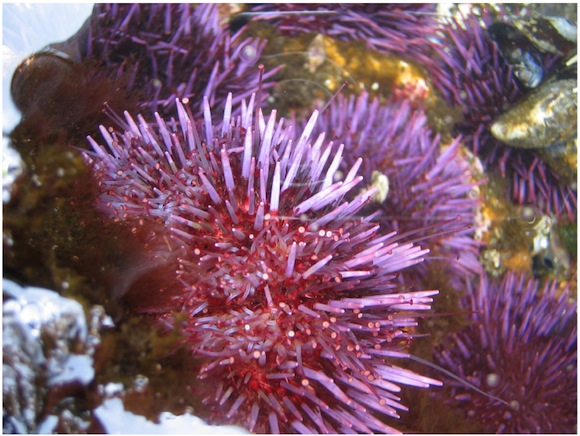 The purple sea urchin, Strongylocentrotus purpuratus, has the ability to pass the trait for higher carbon dioxide tolerance to its offspring. Credit: Gretchen Hofmann

Easily identified by their spherical symmetry and prickly barbs, sea urchins are found on the sea floor all over the world. They are considered a keystone species, meaning their population has an important impact on the rest of the undersea ecosystem. Too many of them and their habitat becomes barren and other algae-eating species disappear; too few and their predators –– including sea mammals, seabirds, and fish –– lose an important food source.

Due to rising carbon dioxide in the Earth’s atmosphere, the oceans of the future are projected to absorb more carbon dioxide, leading to acidification of the water. The change in the ocean chemistry is expected to negatively affect the way urchins and other calcifying creatures create and maintain their shells and exoskeletons.

“It gives them osteoporosis,” said Kelly. Increased water acidity would cause the levels of calcium carbonate –– which the sea urchins require –– to decrease. This, in turn, would result in smaller animals, thinner shells and perhaps shorter spines for the urchins.

To observe the potential effects of future increased levels of carbon dioxide in ocean water, the researchers bred generations of purple sea urchins in conditions mimicking projected environment of the ocean in near the end of the century.

The animals were taken from two locations off the California coast –– a northern site, which experiences greater upwelling, and a southern site that experiences shorter, less frequent bouts of upwelling. Males from one site were crossed with females from the other site. The larvae were spawned and observed in the projected conditions of the future oceans.

While the larvae reared under the future carbon dioxide levels were, on average, smaller, the researchers also noted a wide variation in size, indicating that some of these larvae –– the ones that remained the same size as they would have under today’s conditions –– had inherited a tolerance for higher CO2 levels. Size, said Kelly, is an important trait. It’s tied to feeding rate and the risk of being eaten by other creatures. The animals that can withstand higher CO2 levels in the ocean will leave more offspring than their weaker counterparts. This natural selection, coupled with the finding that variation in size under more acidic conditions is heritable, points to the rapid evolution of the purple urchin.

“This is what allows us to predict that this species will evolve increased tolerance –– as CO2 rises, urchins that have greater tolerance will have a better chance of survival, and they will pass on their greater tolerance to their offspring,” said Kelly.

The findings suggest that the effects of ocean acidification may not have as deleterious an impact on sea urchin size or population growth rates as previously thought. Good news for the keystone species, and good news for the creatures that eat them. The results also suggest that adaptation is a major factor in the response of ecologically important species to climate change.