Thousands of species of microorganisms are making their way from Asia across the Pacific Ocean and landing in North America.

A surprising number of microorganisms – 99 percent more kinds than had been reported in findings published just four months ago – are leaping the biggest gap on the planet. Hitching rides in the upper troposphere, they’re making their way from Asia across the Pacific Ocean and landing in North America.

For the first time researchers have been able to gather enough biomass in the form of DNA to apply molecular methods to samples from two large dust plumes originating in Asia in the spring of 2011. The scientists detected more than 2,100 unique species compared to only 18 found in the very same plumes using traditional methods of culturing, results they published in July. 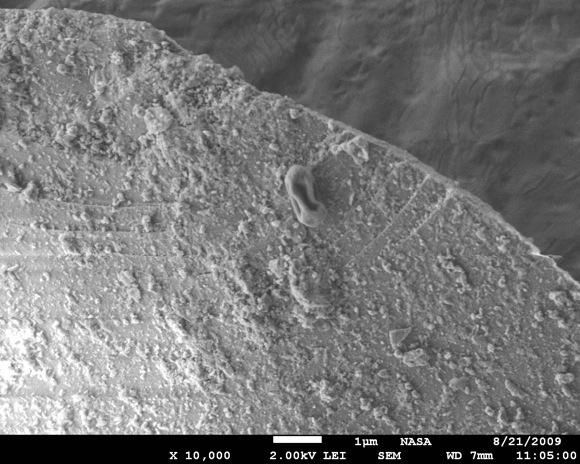 Scanning electron microscopy reveals a raisin-shaped bacterial spore atop a grain of dust that journeyed from Asia high in the troposphere to the West Coast and was detected by an observatory in central Oregon. Image Credit: NASA Kennedy Space Center

“The long-range transport and surprising level of species richness in the upper atmosphere overturns traditional paradigms in aerobiology,” says David J. Smith, who recently earned his doctorate at the University of Washington in biology and astrobiology. He’s lead author of a paper in the current issue of the journal Applied and Environmental Microbiology.

It’s been estimated that about 7.1 million tons (64 teragrams) of aerosols – dust, pollutants and other atmospheric particles, including microorganisms – cross the Pacific each year. The aerosols are carried by wind storms into the upper reaches of the troposphere. The troposphere, the layer of air closest to earth up to about 11 miles (18 kilometers), is where almost all our weather occurs.

Co-author Daniel Jaffe, professor at UW Bothell, has previously documented especially large plumes of aerosols in the troposphere making the trans-Pacific trip in seven to 10 days. The recent findings are based on two such plumes, one in April and the other in May of 2011, detected at Mount Bachelor in the Cascade Mountains of central Oregon. 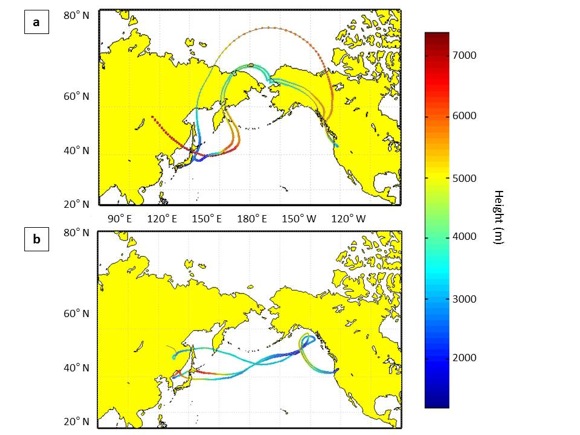 Plumes of dust, one in April and the other in May 2011, originated in Asia and traveled west – high in the troposphere – across the Pacific Ocean to the West coast where they were detected by an observatory in central Oregon. Scientists used models to determine the back trajectories. Image Credit: U of Washington

Most of the microorganisms – about half were bacterial and the other half fungal – originated from soils and were either dead on arrival or harmless to humans. A few fungal species have been associated previously with crop wilt but scientists had no way of determining if any crops were affected during either plume event.

“I was very surprised at the concentrations. One might expect the concentrations of cells to decrease with altitude based on fallout and dilution,” Smith said. “But during these plume events, the atmosphere was pooling these cells just as it does with other kinds of air pollution.”

Interestingly, Smith says, two of the three most common families of bacteria in the plumes are known for their ability to form spores in ways that they can hibernate safely during harsh conditions, making them especially well adapted to high altitude transport.

“I think we’re getting close to calling the atmosphere an ecosystem,” Smith said. “Until recently, most people would refer to it as a conveyor belt, or a transient place where life moves through. But the discovery of so many cells potentially able to adapt to traveling long distances at high altitudes challenges the old classification.”

Cells also can interact with their high-altitude environment, for example, becoming the nucleus for rain drops and snow flakes and influencing the amount of precipitation that falls. Other scientists estimate that 30 percent of global precipitation stems from microbes.

On the other hand, scientists have yet to see evidence of metabolism or growth of microorganisms while aloft and there’s a limited amount of time that any organism might reside there.

Sampling the upper troposphere for microorganisms in the past has been a spotty effort using aircraft and balloons, Smith said

“Because it is so difficult to get samples, I argue it’s probably the last biological environment on the planet to be explored,” he said.

Mount Bachelor, like many other mountains in the Cascades, has a peak tall enough to pierce the upper troposphere. Unlike other mountains in the Cascades, however, the top of Mount Bachelor is a far more accessible place for an observatory because a ski area exists there. There’s power and bringing equipment and personnel to the observatory is not a major undertaking, you just take the ski lift.